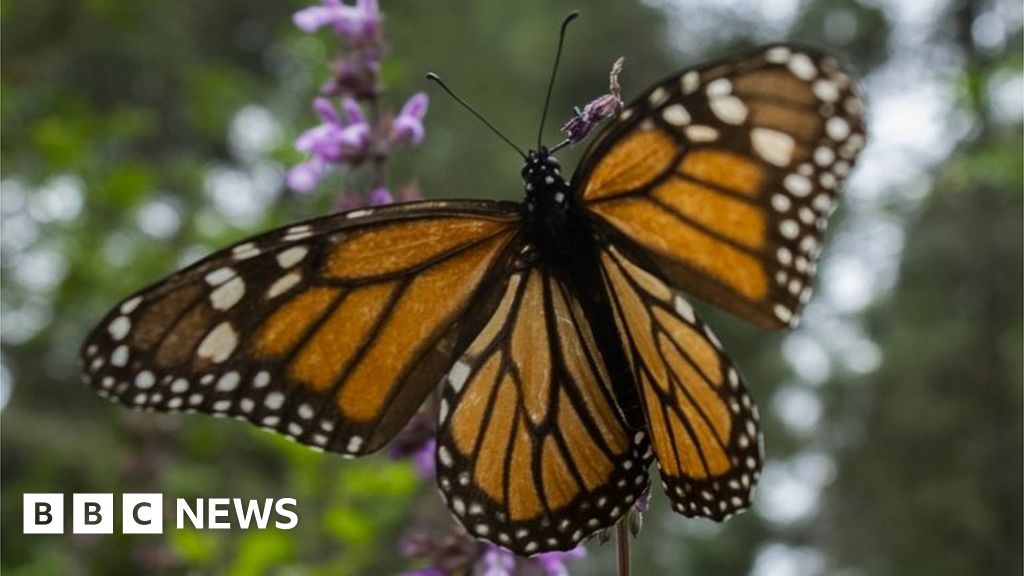 Relatives and co-workers live in fear after two monarch butterfly activists were found dead in Mexico.

Mr Gómez's colleagues and family, who believe he was murdered for his work protecting the threatened species from illegal loggers, are living in fear. They spoke to the BBC's Will Grant in Michoacán.

"Hello friends, it's a lovely warm day here at El Rosario butterfly sanctuary after a recent cold snap," said Homero Gómez on one of his regular Twitter videos.

A burly, good-natured man with a thick moustache, he would appear in a haze of thousands of tiny orange monarch butterflies - the insects settling on his white shirt - to encourage the public to visit the reserve and witness the spectacular annual migration for themselves.

He was right, it is a breathtakingly beautiful sight.

As you climb through the forest in Michoacán, clouds of butterflies flutter overhead at the end of their 4,500km journey from Canada. You reach a point where they entirely coat the oyamel firs - the natural habitat for their winter in Mexico - the green branches obscured by the vibrant orange of their wings.

'Not scared of anyone'

Homero Gómez dedicated his life to protecting the monarch from the twin threats of climate change and deforestation. His friends and family fear it may have cost him his life.

"He was very cheerful, strong, active and jovial," recalls Javier Miranda, one of the guides at the reserve, as we trek into the sanctuary.

"And he wasn't scared of anyone. He was always working to benefit the ejido [a Mexican cooperative system of community and shared ownership] and would cajole the government by saying 'help us with this, support us with that'."

Since Homero Gómez's body was found down a well, the atmosphere among the guides at El Rosario is one of grief and fear.

"We had many years of working together," said Mr Miranda as he wept at the side of the trail, tourists passing by oblivious to his tears. "We can't let what Homero taught us collapse. We have to keep the sanctuary going without him."

The drug cartels that rule Michoacán are involved in a range of different criminal enterprises, including illegal logging of protected tropical hardwoods, firs and pines.

One theory in the community is that Homero Gómez was murdered for hindering the cartels' activities. He organised a large-scale reforestation programme and set up teams of guides to patrol the reserve day and night.

Pushed on whether he thought his friend's activism had got him killed, Mr Miranda did not want to say, partly out of fear of reprisals against others at the sanctuary.

But the Gómez family have few no qualms about speaking out. "The whole family believes it was murder," explains his 19-year-old son, also called Homero, whom I met inside the reserve.

"The state attorney gave a news conference in which he said that my father's death was an accident, that he drowned. But the autopsy showed the body had received a blow to the head."

The family say they have been given no viable explanation for the head trauma. Furthermore, they say, Homero Gómez knew the area intimately and would not have fallen down a well, which was not even on his normal route home.

In a sign of the rotten state of Michoacán's institutions, more than 50 local police officers in nearby Ocampo were briefly detained and interrogated in connection with the case.

"The family is worried and frightened," says the young man, still numb with grief.

"My father was a fundamental piece of the ejido. He was an obstacle to anyone who wanted to mess with this community because he was always active in protecting the forest and his people." He adds that the family have not ruled out that he was killed by illegal loggers for "impeding" their business.

Impunity in Mexico is near total, especially in Michoacán where barely 3% of murders are solved. With a second guide, Raúl Hernández, also found dead in a nearby reserve with signs of having been beaten with a blunt instrument , the local authorities are under pressure to conduct a thorough investigation.

Yet the state attorney general's office has already indicated they believe Homero Gómez's death was an accident. They turned down repeated requests for an interview.

Juan Plancarte Esquivel of the state Human Rights Commission admits that the official reaction in the case has been inadequate.

The authorities "need to raise their level" he says, "to give trustworthy answers which can satisfy the calls being made for investigations - calls which in this state are louder and more frequent every day".

At Homero Gómez's funeral, a handful of monarch butterflies flew into the church in Ocampo and fluttered above the congregation. In Mexican culture, the monarch is considered the soul of the recently departed as its annual return to Mexico coincides with Day of the Dead on 2 November.

His son says that Homero Gómez firmly held that belief too: "We know he will return in the form of millions of butterflies in November."