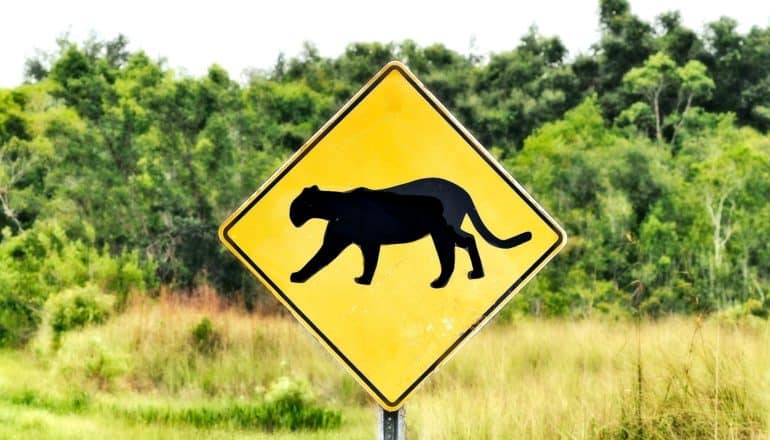 The framework reveals the presence of “sensory danger zones,” in which sensory pollutants overlap with animal activity.

“From a conservation biology point of view, we don’t know how to mitigate the effects of sensory pollution if we don’t know what the pathway of harm is,” says Neil Carter, assistant professor at the School for Environment and Sustainability at the University of Michigan.

Human activity has affected animal habitat in almost every conceivable way. Road systems cut through habitat, and lights at night mimic or cover up the moon and stars. Chemicals from industry or farming leach into water systems or waft over flowers in need of pollination.

In their study, Carter and coauthors give an example of New York City’s annual 9/11 memorial tribute. The tribute coincides with birds’ annual migration from northern regions to wintering grounds in Central and South America. Because birds use “celestial cues” during their migration, the 44 spotlights that form two pillars of light can attract up to 15,000 birds in a single night.

“(The birds) will fly in circles inside the beams until morning, often dying from exhaustion and collisions with artificially lit structures,” according to the authors.

The research group defined three mechanisms that affect species’ fitness—their mortality and ability to reproduce—through both physiological effects and effects that cause changes in behavior. They call these mechanisms masking, distraction, and misleading.

Masking is the process by which sensory pollution affects the ability of an organism to detect or discriminate a target. Distraction is when sensory pollution pulls an animal’s attention from its task at hand. Misleading is when a sensory pollutant “guides animals in the wrong direction toward the wrong target.”

Both traffic noise and light pollution are examples of masking, which occurs when a pollutant mimics natural environmental stimulus. Masking occurs when artificial lights cover the glow of the moon, preventing birds or insects from detecting it. Traffic noise is another example of masking. The audio spectral frequency of the noise overlaps with the songs of several bird species, the researchers say. Chemical pollution such as humic acid from industrial wastewater can interfere with the ability of swordtail fish to detect species-specific odors.

Distraction can occur when noise or light of any frequency or spectrum jerks an animal’s attention away from its task: a cougar hunting deer can be distracted by headlights or road noise. A moth may be unable to locate nectar if there’s also a different chemical compound present.

Misleading works when an animal reacts to a sensory pollutant as if it’s a natural cue or signal, “often leading to increased mortality via collisions, exhaustion, or predation,” the researchers say. These can be artificial lights mimicking celestial cues or beaked whales perceiving military sonar as killer whale vocalizations.

“If we understand the mechanism at play, perhaps we can devise specific interventions and solutions to adopt to minimize the effect of anthropogenic impacts,” Dominoni says. “For instance, light has a lot of properties. By changing some of these properties of the light, we might very well minimize the impact light pollution has on wildlife.”

Some of these solutions can be as simple as shields that direct streetlight downward or building berms around roads to reduce road noise, Carter says.

“Night lighting and anthropogenic sound are not localized to certain habitats and certain countries. It’s a global phenomenon,” he says. “Clarifying these mechanisms can help develop solutions to biodiversity loss and anthropogenic impacts worldwide.”