Alan Turing: Stolen items to be returned to UK from US after decades

A collection of items belonging to the Bletchley Park code-breaker were stolen from Dorset in 1984.

Items belonging to World War Two Bletchley Park code-breaker Alan Turing that were stolen from the UK decades ago are to be returned from the US.

The mathematician's miniature OBE medal is among 17 items that were taken from Dorset's Sherborne School by Julia Turing, who is no relation, in 1984.

They were found at her home in Colorado in the US in 2018.

A US civil court case launched against her has been settled out of court and the items are due to be returned.

According to US court papers and Sherborne School, Ms Turing, who legally changed her name from Julie Schwinghamer in 1988, removed the items without permission from archives given to the school in 1965 by the Turing family, in memory of the time he spent there as a pupil.

A letter sent to Turing by King George VI, presenting him with his OBE honour, Turing's Princeton University PhD certificate, school reports and photographs were among the items that were taken.

Ms Turing attempted to loan them to University of Colorado for display in 2018, claiming to be a relative of the mathematician.

After the alarm was raised, an investigation was carried out by police and the items were found at her home in Conifer.

Sherborne School archivist Rachel Hassall said although the boys' boarding school had not been party to the settlement agreement with Ms Turing, it had been informed by Homeland Security Investigations that the items would "in due course" be returned to the school.

"We are sorry that by removing the material from the school archives Ms Turing has denied generations of pupils and researchers the opportunity to consult it," she said.

However, once the material was returned to the school she said it would be available to be viewed in person or via the school archives website .

During a court appearance in Colorado last month, Ms Turing described Turing as "a beautiful man of the finest order", adding: "He lived brightly in my heart throughout my entire life beginning at the age of between eight and nine years old."

She continued: "I am giving up my collection to be handed over to England because I do not want to keep anything from England against their will out of selfishness...

"I wish only the very best for the legacy of Alan Turing, that his belongings, I have had the privilege to be gifted and kept in my presence all these years and deeply cherished throughout my life with the very best of care that I could provide, may now... be handed over to the rest of the world to see and also admire as I did. That is my wish."

Ms Hassall said: "Alan Turing is one of Sherborne School's most distinguished alumni and there is no denying that he was a very individual boy, as he proved when, due to no trains running during the General Strike in May 1926, he cycled, aged 13, 65 miles from Southampton to Sherborne for his first day of term.

"In his last year at the school he was made a school prefect and won all the school prizes for science and mathematics."

Headmaster Dominic Luckett described Turing as one of the school's "most distinguished alumni".

"His crucial work as a code-breaker at Bletchley Park and his enormous contribution to the subsequent development of computing have become more widely recognised in recent years and we as a school are keen to do all we can to preserve and promote his legacy," he said.

Born in Maida Vale, London, in 1912, Turing was not well known during his lifetime.

As well as attending Sherborne School, he gained a mathematics degree at King's College, Cambridge, and PhD at Princeton University in New Jersey.

In 1936 he published a paper that is now recognised as the foundation of computer science.

Three years later he began working at Bletchley Park in Buckinghamshire, where he helped develop the Bombe machine, which was capable of breaking secret German military messages sent using the Enigma machine.

In 1952 he was arrested because he was gay - homosexual acts were illegal in Britain at the time.

Turing died in 1954, aged 41, in Wilmslow, Cheshire, from suicide by cyanide poisoning - though this was disputed by his mother who argued he accidentally ingested cyanide during a chemistry experiment.

He was posthumously pardoned in 2013 , and in 2017 the government agreed to officially pardon all men who had criminal records for being homosexual. This pardoning has become known as the Alan Turing law .

Last year, Turing was named the most "iconic" figure of the 20th Century and he became the face of the new design of the Bank of England's £50 note .

Turing's nephew Sir Dermot Turing, who also attended Sherborne School, said there was "very, very little physical stuff in existence that has anything to do with Alan Turing".

"To find out that items that were squirreled away in mysterious circumstances, by someone who had no right to them and kept them out of the public realm, and for them now to be returned is a really positive and good thing," he said.

"They were donated to the school by my grandmother, it was intended they should form part of the ethos of the place.

"The return of the items will honour what my grandmother wanted."

Turing's research papers and theory work has been held at the National Archives . Apart from Sherborne School, the only other places believed to hold more personal belongings are Cambridge University's King's College and Bletchley Park.

Homeland Security Investigations has not yet responded to a BBC request asking when the items were likely to be returned. 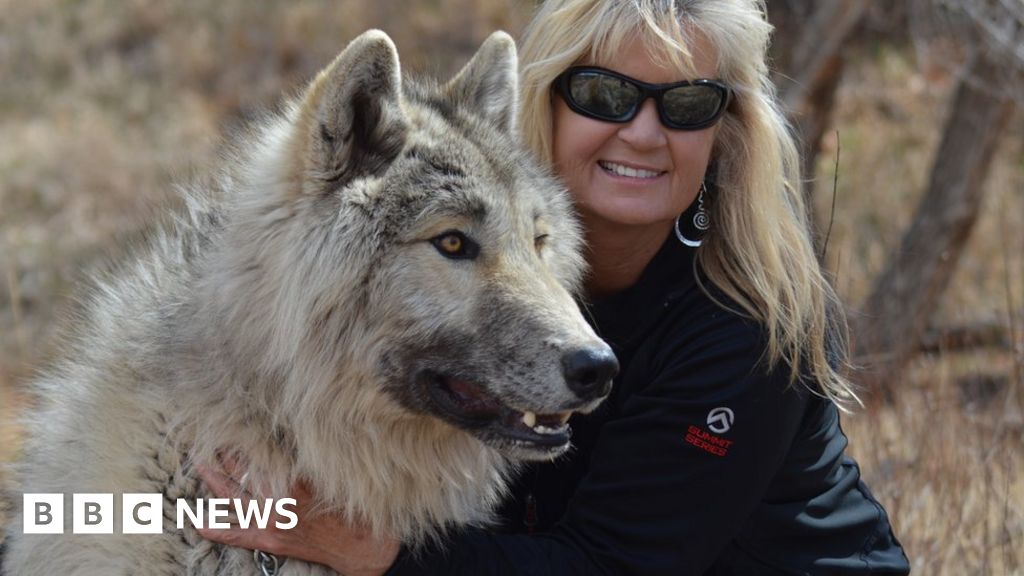 Why this woman hates to hear about 'big bad wolf'