The Team Behind the ‘Dancing Robots’ that Went Viral

Boston Dynamics is an American technology company that has developed a series of robots designed to move in ways similar to humans and animals.

The company has spent years building robots with useful abilities like walking, moving through rough terrain and picking things up with their hands. The machines are designed to be used in work settings to perform a number of different tasks.

Videos of some of the robots – especially those that look like animals when they move – have been popular on the internet in the past.

But the company’s latest video to go viral shows a group of robots dancing to the 1962 hit song “Do You Love Me” by The Contours. The video received more than 23 million views during its first week.

The performance shows two Boston Dynamics humanoid robots, called Atlas, doing several dance moves – such as the twist, the mashed potato and others. The two are joined by Spot, a dog-like robot, and Handle, a wheeled robot designed for lifting and moving boxes.

Speaking to The Associated Press, Boston Dynamics founder and chairperson Marc Raibert admits the video is fun to watch. But he said the real success behind the experiment was the valuable lessons the project taught his team.

“It turned out that we needed to upgrade the robot in the middle of development,” Raibert said. He said that step was necessary in order for the robot to be strong enough and have enough energy to do the whole performance without stopping. “So that was a real benefit to the design,” he added.

The difficulty of teaching robots to dance also pushed Boston Dynamics engineers to develop better motion-programming tools. These tools helped the robots do several things at once - balance, bounce and perform dance moves without breaks.

Some social media users who watched the video commented that the robots’ dancing was so similar to a human that they could not believe their eyes. Some praised the robots’ moves and the technology powering them. Others suggested that what they were seeing was probably computer-generated imagery, or CGI.

But Raibert said it was all real, the result of long and hard work, fueled by a strong desire to program a robot that could dance to the beat. “We wanted it to do human dancing and … when a human dances, the music has a beat and their whole body moves to it — their hands, their body, their head.”

Raibert added: “It looked like the robot was having fun and really moved with the music. And I think that had a lot to do with the result of the production.”

The Atlas robots used a wide range of sensors to perform the dance moves, including 28 actuators. These are devices that serve as muscles by converting electronic or physical signals into movement. The robots were also equipped with three powerful computers, including one that processes perception signals and two that control movement.

Aside from the technology progress, Raibert said it was also pleasing that the video became so popular with people across the world.

“We got a call from one of the sound engineers who had recorded the original Contours performance back in the ’60s. And he said that his whole crew of Motown friends had been passing it around and had been excited by it,” he added.

The Associated Press reported this story. Bryan Lynn adapted the report for Learning English. Hai Do was the editor.

upgrade – v. to improve something by making it newer or better quality

benefit – n. a good or helpful result or effect

bounce – v. jump up and down on a soft surface

convert – v. to change the appearance or purpose of something

perception – n. the ability to notice something

Motown – n. a kind of popular music that was produced by an American record company based in Detroit in the 1960s and 1970s 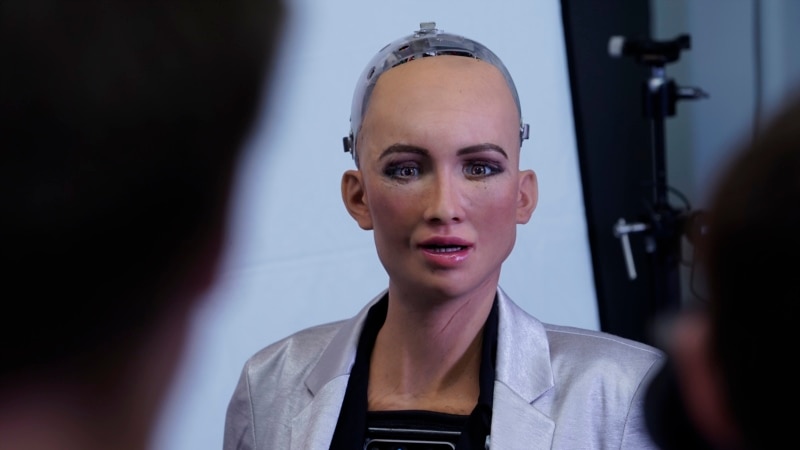 Company Aims to Produce Thousands of Humanoid Robots in 2021