Christmann was a camera assistant and expedition photographer for an episode of the BBC series Dynasties , narrated by Sir David Attenborough.

He has also produced imagery for publications including National Geographic, with his work winning the Natural History Museum Wildlife Photographer of the Year Portfolio Award in 2019.

In his new book Penguin: A Story of Survival, he shares some of his favourite images from Antarctica.

Christmann's first winter in Antarctica was in 2012, when he worked as a geophysicist for the Alfred Wegener Institute.

He spent nearly 15 uninterrupted months working at the Neumayer-Station III, close to Atka Bay, where 10,000 emperor penguins gather each year.

"Staying a winter in Antarctica is an all-or-nothing decision," Christmann told the BBC.

"During winter time it becomes highly risky to fly people in and out of Antarctica," he added.

"The huddle is the emperor penguins' secret weapon against the cold and their ultimate survival strategy.

"Working as a giant incubator, the birds will stand close to each other with their heads tucked between the shoulders of the birds in front of them.

"Sharing their dissipated body heat, the temperature can reach up to 37°C in the centre of the huddle.

"Emperor penguins are designed for many things, but when it comes to mating it becomes quite obvious that balancing is not their strong suit.

"When the male steps onto the back of the female just before copulation, he struggles to find a safe stance - resembling someone taking their very first surfing lesson."

The photographer describes his expeditions in Antarctica as "extremely exciting and dull at the same time."

"The base itself is very big and modern and there is nothing you would miss for essential living.

"In the beginning this is all new and exciting, but later on you will start missing your family and friends, and your routines from home.

"The worst things are storms, which can last for weeks at a time, when the station shakes and even the plates in the dining room rattle.

"These days can feel a bit like being imprisoned. But it is also a part of station life and of course one can only appreciate the great days if you also know how the bad ones feel."

In 2016, Christmann returned to Antarctica with two colleagues as part of the BBC Natural History Unit, to film emperor penguins in Neumayer for the series Dynasties.

"Emperor penguins don't build any nests and hence must carefully balance the fragile egg on the backs of their feet.

"Finally, they will put their brood pouch over it, in order to keep it warm and shielded from the elements.

"With every step they take, they rotate the egg on their feet a tiny bit, to evenly warm it from all sides.

"After the female has laid her egg and successfully passed it on to the male, it is time for her to leave the colony.

"She desperately needs to feed, and refuel her depleted energy reserves.

"During the early stages of egg-laying, many females will start their long hike to the ocean all by themselves."

Christmann and his team didn't wear camouflaged clothes, opting for red overalls instead so that they could be easily spotted if they got lost in a snowstorm.

"Many of the emperor penguins are used to seeing the 'red guys in overalls' around their colony.

"There is no instinct in them telling them to run away, they simply do not know any land-based predators.

"Their only enemies come from above (like skuas and giant petrels) and below (like leopard seals and orcas).

"Even when the penguins are huddling and conserving their energy on a cold Antarctic winter day, there is always the odd one out who is already warm enough.

"Many times, these individuals broke away from the colony and welcomed us as we carefully approached from afar.

"We always considered them to be our welcoming committee."

Christmann describes the sound made by 10,000 penguins as "absolutely amazing".

"They have a very characteristic trumpet-like call ... many people would describe it as 'ugly' and a 'cacophony', but to me that could not be further from the truth.

"It's the call of life at the end of the world in a place that is not inviting to life, and so to me this is a glorious symphony.

"Even though their calls all sound the same to us humans, each call has an individual melody and beat which is essential for the identification of individuals.

"Emperor penguin couples will find each other in the midst of these thousands of lookalikes by the unique sound of their voice and the qualities of their movement patterns.

"One behaviour of emperor penguins which is not fully understood up to this day are 'playdates' for the chicks, which are arranged by the parents.

"Usually two adults, with chicks on their feet, will stand right in front of each other and constantly lift their brood pouches.

"The chicks usually start interacting with each other, calling and reaching for their peers on the other side.

"The parents will sometimes stand so close to each other that their chests touch and they can rest against each other.

"The strategy of huddling is a behaviour that has to be learned by the young penguin chicks early on in their lives.

"It is one of the cutest things I have ever seen.

"Despite their parents being extremely calm and organised while huddling, the young ones try to take shortcuts into the warm centre by crowd-surfing over their peers.

"Sooner or later, however, they will understand that everybody gets to be in the warm centre."

In the midst of the beauty, Christmann has a warning.

"Over the past decades, slowly warming ocean currents have affected sea ice stability in many ways.

"Emperor penguins normally breed on the sea ice, but its increasing destabilisation often forces them to finish their annual moult.

"When it is time for them to return to the ocean, they must take risky leaps from steep ice cliffs.

"While this looks spectacular, in reality it is a behaviour that should not exist.

"Sadly, human choices, and our impact on the environment, even affect far away ecosystems in which no significant populations of humans are present."

Penguin: A Story of Survival by Stefan Christmann, is published by teNeues. 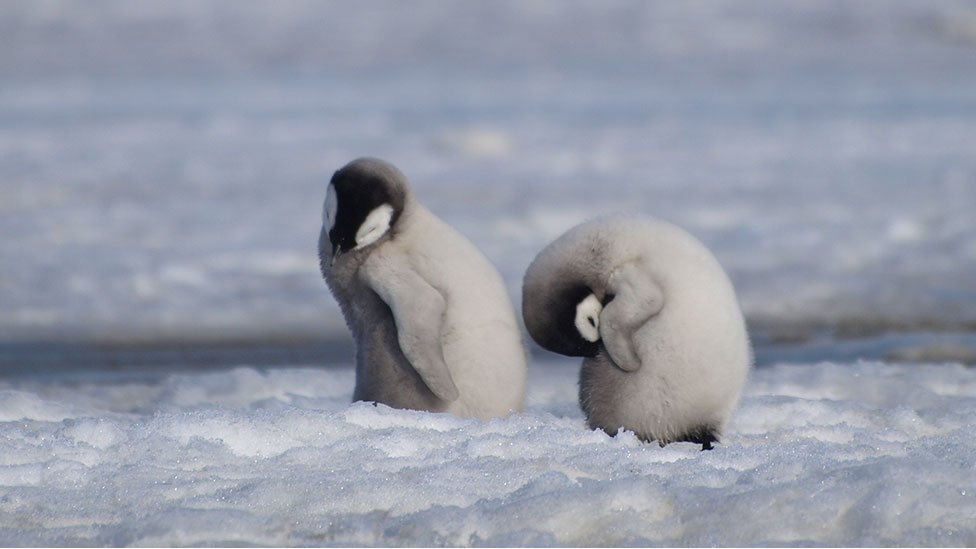 Thousands of penguin chicks wiped out