Sophia is a robot with many abilities. She speaks, jokes, sings and even makes art. Now, the next step in the robot’s career could be that of a musician.

Hanson is the head of Hanson Robotics and Sophia’s creator.

“We’re so excited about Sophia’s career as an artist,” he said.

Hanson has been developing robots for the past 25 years. He believes realistic-looking robots can connect with people and assist in industries such as healthcare and education.

Sophia is the most famous robot creation from Hanson Robotics. She can copy human facial expressions, hold conversations and recognize people. In 2017, she was given Saudi Arabian citizenship, becoming the world’s first robot citizen.

Hanson said he imagined Sophia “as a creative artwork herself, that could generate art.”

In March, a digital artwork Sophia created jointly with Italian artist Andrea Bonaceto sold for $688,888 in the form of a non-fungible token, or NFT.

An NFT is something that only exists in the digital world. It is based on a technology called blockchain, which is also used with digital currency systems known as cryptocurrency.

Blockchain is an online list containing information that can be used and shared within a large network open to the public. The technology permits pieces of information to be checked and stored safely.

An NFT can be attached to a piece of digital artwork or other things existing in digital form. The NFT can be used to provide proof that the pieces are authentic. This is what permits digital artwork to be bought and sold. While anyone can view the work, the buyer has official ownership rights over the objects.

The digital work that sold for $688,888 is titled “Sophia Instantiation.” It is a 12-second video file which shows Bonaceto’s portrait changing into Sophia’s digital painting. Along with the digital file is the physical artwork painted by Sophia.

The buyer, a digital artwork collector and artist known as 888, later sent Sophia a photo of his painted arm. The robot then added that image to her knowledge and painted more on top of her original piece.

On the social media service Twitter, Sophia described the work as the first NFT shared work between an “AI, a mechanical collective being and an artist-collector.”

Sophia’s artwork selling as an NFT is part of a growing trend. In March, a digital artwork by artist Beeple sold for nearly $70 million, becoming the costliest digital artwork ever sold.

Zen Soo and Alice Fung reported on this story for the Associated Press. Jonathan Evans adapted this story for Learning English. Hai Do was the editor.

generate – v. to cause to come into being

mechanical – adj. of or relating to machinery

trend – n. something that is currently popular or fashionable 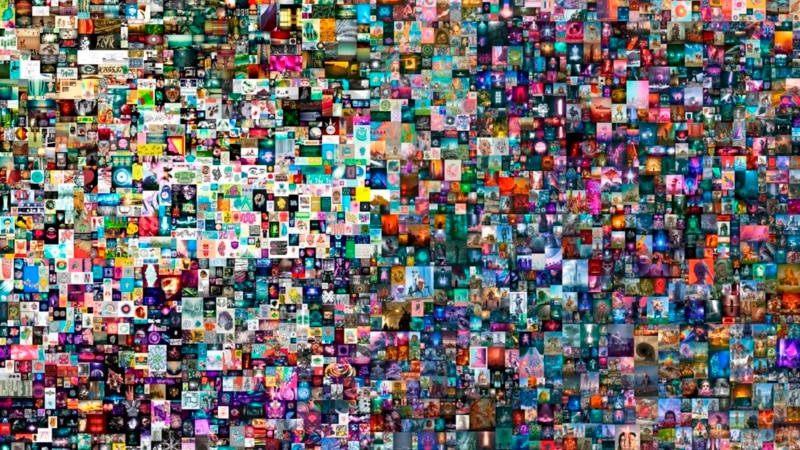 What Is an NFT?