Serbian tennis star Novak Djokovic asked an Australian court to block his deportation after the government canceled his visa for the second time on Friday.

Djokovic's legal team made the request shortly after Australian Immigration Minister Alex Hawke canceled his visa. Hawke said his decision was based on “health and good order grounds,” adding “that it was in the public interest to do so.”

The Serbian legal team called the decision “irrational.” They said Hawke had argued that permitting Djokovic to stay would incite anti-vaccination feelings in the country. Djokovic has publicly opposed the vaccine requirement. And he had received a medical pardon, or exemption, from vaccination to enter Australia.

At an emergency hearing late Friday, an Australian judge ruled that Djokovic cannot be deported while the case is being heard. If Djokovic was deported, he could face a three-year ban from entering the country.

Hearings for the case will be held over the weekend just before the start of the Australian Open on January 17.

The world’s top tennis player is looking to win a record 21st Grand Slam championship at the Australian Open. He is currently in a three-way tie for Grand Slam wins with Spain’s Rafael Nadal and Roger Federer of Switzerland.

Djokovic has won the last three Australian tournaments played in Melbourne. He is the favorite to win this year’s championship and is to play against another Serbian player on opening day.

Everyone at the Australian Open — including players, their support teams, and fans — is required to be vaccinated against COVID-19. Djokovic is not vaccinated and had sought a medical exemption on the grounds that he had COVID-19 on December 16.

That exemption was approved by the Victoria state government and Tennis Australia. But the Australian Border Force rejected the exemption and canceled his visa when he landed in Melbourne on January 5. A judge then overturned the decision, saying Djokovic had not been given enough time to work with his legal team.

On Wednesday, Djokovic admitted that he made an “error” when he did not isolate after getting the coronavirus disease. Around that time, he attended a tennis event with children in Belgrade without wearing a face covering and met with reporters from the French newspapers L'Equipe.

He also blamed his support team for providing incorrect information on his visa documents. In his visa request, Djokovic declared that he had not traveled anywhere in the 14 days before his arrival in Australia. But Djokovic, who lives in Monte Carlo, Monaco, was seen in public in Spain and Serbia during that period.

Greek Stefanos Tsitsipas is the world’s number fourth male player. He said before Hawke's decision that Djokovic was "playing by his own rules" and making vaccinated players "look like fools."

The Association of Tennis Professionals says 97 of the top 100 male players in the world are vaccinated. And, Tennys Sandgren, the world’s number 93 player could not take part in the Australian Open because he did not meet the two-shot vaccination requirement.

Many Australians are angered that Djokovic has been exempted from vaccination so he can play in the Australian Open.

Australia has spent more time in lockdown than any other country. Currently, there are a record number of COVID cases in Australia. And an online poll by the News Corp media group found that 83 percent favored deportation for Djokovic.

Australian Prime Minister Scott Morrison praised the decision to cancel Djokovic’s visa. He said, "Australians have made many sacrifices during this pandemic, and they rightly expect the result of those sacrifices to be protected.”

Hai Do adapted this story for Learning English based on Associated Press and Reuters reporting.

deportation - n. the action of forcing someone to leave a country

irrational - adj. not based on reason or good judgement 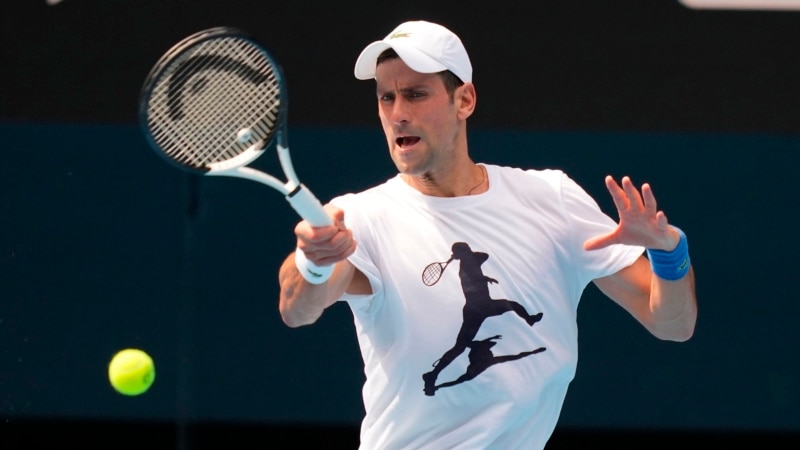