It’s been more than 500 days since Marisa Silveri had a drink.

When the pandemic hit, Silveri, a single mother of two, considered herself a social drinker. But lockdown layered extra home duties on top of heightened anxieties about health, and before long she found herself a little too focused on the first sip of the evening.

“In the beginning of COVID, I definitely was one of those mothers who was like, ‘I can’t wait for a glass of wine,’ after the kids were in bed, because it was so stressful,” she said. “My kids were in virtual school. I was doing a full-time job.”

Silveri, an associate professor of psychiatry at Harvard Medical School and director of the Neurodevelopmental Laboratory on Addictions and Mental Health at McLean Hospital, wasn’t alone. A study by the National Institute on Alcohol Abuse and Alcoholism showed that alcohol consumption in November 2020 was 39 percent higher than in February 2020, with a 30 percent rise in binge drinking. The institute has also published reports showing that per capita consumption increased 2.9 percent in 2020, the fastest rate since 1968, and that alcohol-related deaths increased 25 percent between 2019 and 2020. In January, researchers at Massachusetts General Hospital and Harvard Medical School estimated that increases in drinking during the COVID crisis will result in 8,000 additional deaths from alcohol-related liver disease, 18,700 cases of liver failure, and 1,000 cases of liver cancer by 2040.

Silveri and other Harvard experts said that though the pandemic appears to be slowly releasing its grip on our daily activities, there’s little sign that its effects on our mental health — and related alcohol consumption — are receding.

“We are scrambling to try to keep the wait times to where they had been prior to COVID,” said Kevin Hill, an associate professor of psychiatry at the Medical School and director of the Division of Addiction Psychiatry at Beth Israel Deaconess Medical Center. “And we’re having a lot of trouble doing that.”

Scott Hadland, chief of the Division of Adolescent and Young Adult Medicine at MassGeneral Hospital for Children, says the story has been different for younger drinkers.

Hill said he’s committed to keeping wait times for those who need medical intervention for drinking and other substance use disorders to five weeks or less. To keep pace with rising demand, he has shifted initial screening for some patients from medical personnel to social workers and increased the number of patients he sees personally.

“We’ve had people who were in a precarious position prior to the pandemic, and some of those people have really struggled,” he said. “I’ve had numerous patients who were doing well prior to the pandemic and the pandemic pushed them over the edge and put them in a difficult position. And we’ve also had a number of people whom we had never seen before and were drinking on their own and had family members and physicians reach out. It is unusual in the sense that among them are some patients who are older and have successfully navigated many of life’s challenges without alcohol. The pandemic arrives and they find themselves drinking in an unhealthy way.”

For some patients, virtual visits were a pandemic-era change that made a difference, said Joji Suzuki, director of the Division of Addiction Psychiatry at Brigham and Women’s Hospital. But for many of the most serious cases, not to mention patients with no access to the internet, the halt to face-to-face treatment was a serious challenge — and threat.

“We saw many patients who have more tenuous connections to technology — whether that’s Wi-Fi or smartphones or phones in general,” Suzuki said. “Those patients had a much more difficult time accessing care, so there was a greater likelihood that they would fall off treatment. For some patients, especially those with more severe ailments, having face-to-face contact was really important. Not having that really had a big impact on top of everything else that we had to go through with COVID.”

Joji Suzuki, director of the Division of Addiction Psychiatry at Brigham and Women’s Hospital, describes safe limits: a weekly average of no more than two drinks per day for men and one for women, and no more than five drinks at any one time for men or four for women.

While drugs have been developed to counter alcohol-related cravings, they’re not very effective, with a net effect equal to a reduction of one drink per day, Suzuki said. That means that psychosocial support, such as in-person counseling and Alcoholics Anonymous meetings, are critically important.

Early in the pandemic, these face-to-face options “disappeared overnight, which was quite traumatic for a lot of patients,” Suzuki said. “People tried online versions, but it was just not the same. That’s started to change, thankfully.”

Another group on Suzuki’s radar is at-risk drinkers, whose numbers have surged the past two years. This group includes people who were concerned about their drinking before the pandemic and saw it worsen and light or moderate drinkers whose consumption rose during lockdown.

“They don’t meet criteria for alcohol use disorder,” Suzuki said. “So they don’t need detox, they don’t need formal treatment, but clearly they’re drinking above a certain threshold that used to be called the safe drinking limits.”

Those limits are a weekly average of no more than two drinks per day for men and one for women, and no more than five drinks at any one time for men or four for women. Heavier consumption, Suzuki said, carries immediate health risks that go beyond discussions about the long-term effects of moderate drinking.

“We see pretty horrific injuries in people because they fell down the stairs because they were drunk,” Suzuki said. “The acute effects of intoxication due to binge drinking carry huge health consequences.”

“I’ve had numerous patients who were doing well prior to the pandemic and the pandemic pushed them over the edge," said Kevin Hill, director of the Division of Addiction Psychiatry at Beth Israel Deaconess Medical Center.

At-risk drinkers are an important group to reach, Suzuki said, because they make up a larger cohort than problem drinkers and are significantly easier to help.

“Clearly, at the population level, there are many, many individuals who exceed safe drinking limits, and they’re most responsive to minimal intervention,” Suzuki said. “People who are average drinkers don’t necessarily need to stop. They need to moderate their drinking and monitor it and stay below these thresholds.”

For those who need to cut back, effective tools include drink-tracking apps and conversations with a primary-care physician, which have been shown to reduce drinking behavior for six months to a year.

Scott Hadland, chief of the Division of Adolescent and Young Adult Medicine at MassGeneral Hospital for Children, said that pandemic-related shifts in alcohol consumption haven’t affected all ages uniformly. Stress coupled with travel restrictions and lockdowns have encouraged older drinkers to reach for a glass at home, where fewer social controls exist to curb excessive drinking. The story has been different for younger drinkers. Studies have shown that teen and young-adult drinking declined during the pandemic, largely because teenage consumption usually happens at parties and in social contexts that COVID restrictions reduced. Similarly, for college-age drinkers, the closure of bars and dorms limited situations that might have led to excessive drinking.

As a neuroscientist who studies binge behavior, alcohol-induced blackouts, and alcohol’s effect on the adolescent brain, Silveri was already familiar with the many facets of drinking. Funded since 2004 by the NIAAA, she and her team have acquired hundreds of MRI images that illustrate alcohol-related changes in the brain. As she thought about her own life and behavior, she became inspired by the growing “sober curious” movement and events that require participants to give up alcohol for a specific period of time. In 2021, she gave “Dry January” a try.

“I think about alcohol every single day — occupational hazard — so I was like, ‘This is a good experiment for me, personally and professionally,’” Silveri said. “After Dry January, it was easy to make it through February, then March and April. I’m like, ‘What about a year?’ I felt both better and empowered. It also gave me a voice and an appreciation for folks who want to cut down or go alcohol-free, but who are also faced with so many challenges — pressure by friends and family, limited options at social gatherings, and alcohol cues that are everywhere.”

Any approach to reducing or quitting drinking has to be personalized, she said, employing practices that might be right for one person but maybe not another. Exercise can help. Mindfulness, yoga, and exploring forgiveness — of oneself and others — are potentially powerful mental and emotional supports that are increasingly supported by empirical research. And don’t underestimate the value of adequate sleep.

For Silveri, the translational nature of her work, which allows her to see alcohol’s impact from the molecular level to brains and behaviors of individuals, has encouraged her to bring her knowledge to the clinic. So she’s headed back to graduate school to pursue a counseling degree.

“It’s been an interesting journey, as a researcher, community educator and advocate for destigmatizing mental illness, and as a mom,” Silveri said. “I manage a full-time neuroscience career and I’m a full-time graduate student getting a mental health counseling degree — and I have two children. I don’t have time for anything that will impact the energy I need to keep all of the balls in the air.” 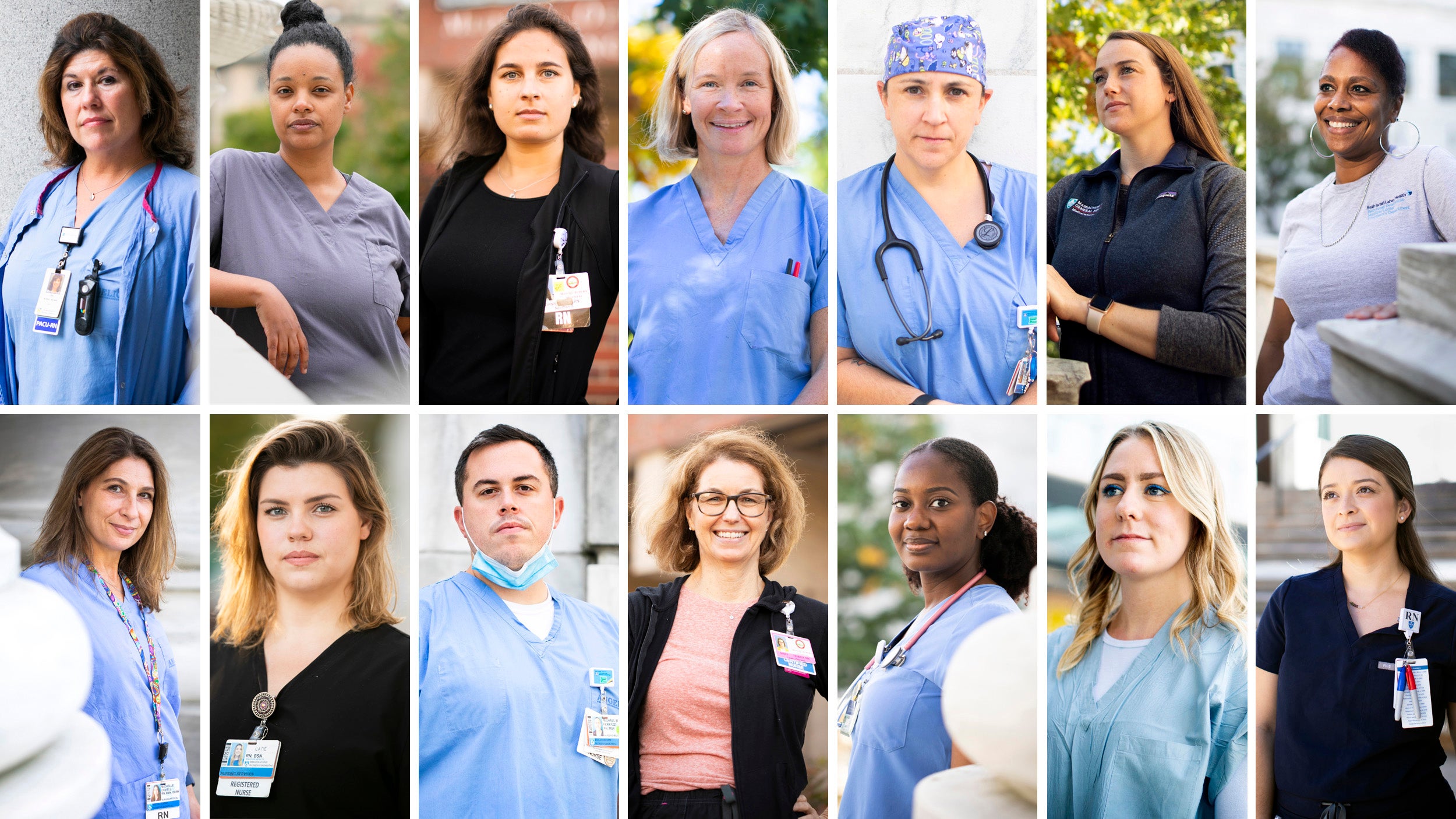 14 nurses on life and work during COVID