Sanding trick gets water to slide right off surfaces

Researchers have created a new method to make surfaces "superhydrophobic." That means water can't touch it, which could have a lot of interesting uses.

Researchers have developed a simple method to make surfaces superhydrophobic—that is, very water-repellant—without chemicals often used in such processes.

Their technique involves sandpaper, a selection of powders, and some elbow grease.

The researchers showed that sanding a surface increases its ability to shed water without getting wet . But grinding in a powder at the same time gives it hydrophobic superpowers.

Better yet, their superhydrophobic surfaces also have excellent anti-icing properties . They found it took water 2.6 times longer to freeze on treated surfaces compared to untreated materials. They also noticed that ice lost 40% of its adhesion strength, even in temperatures as low as minus 31 degrees Fahrenheit.

How well a surface absorbs or repels water can be measured by analyzing the contact angle of droplets that settle there. To be superhydrophobic, a material has to have a water contact angle—the angle at which the surface of the water meets the surface of the material—larger than 150 degrees. The greater the beading, the higher the angle. An angle of zero degrees is a puddle, while a maximum angle of 180 degrees is a sphere that just touches the surface.

To achieve their super status, hydrophobic materials have low surface energy as well as a rough surface. The researchers’ best materials showed a contact angle of about 164 degrees.

“However, the [James Tour] group’s idea of introducing select powder materials between the rubbing surfaces during the sand-in process means a tribofilm is formed,” Higgs says. “That gives the added bonus of functionalizing the surface to repel water ever more.”

A tribofilm forms in a chemical reaction on surfaces sliding against each other. The surface of an engine’s piston is a good example, he says.

“These forces are at their greatest when surfaces come into close contact,” he says. “Therefore, powder particles can adhere even after the sand-in process is completed.”

Structural changes and mass and electron transfer appear to lower the surface energy of the materials that, before treatment, were already either mildly hydrophobic or hydrophilic, according to the researchers.

The researchers applied the technique on a variety of surfaces (Teflon, polyethylene, polypropylene, polystyrene, polyvinyl chloride, and polydimethylsiloxane) with a variety of powder additives. These included laser-induced graphene fiber, turbostratic flash graphene, molybdenum disulfide, Teflon and boron nitride. A variety of aluminum oxide sandpapers were used, from 180- to 2,000-grit.

The resistant materials proved to be robust, as neither heating to 130 degrees Celsius (266 degrees Fahrenheit) nor 18 months under the hot Houston sun degraded them. Sticking transparent tape to the surface and peeling it off 100 times did not degrade them, either. But even when the materials began to fail, the labs found that re-sanding them could easily refresh their hydrophobicity.

The team also discovered that by changing the sand-in conditions and the powder additives, materials can also be made hydrophilic, or water-absorbing.

“It’s hard to make these materials,” he says. “Superhydrophobic surfaces do not permit water accumulation. The water beads and rolls right off if there is even the slightest angle or gentle wind.

“Now, almost any surface can be made superhydrophobic in seconds,” Tour says. “The powders can be as simple as Teflon or molybdenum disulfide, both of which are readily available, or newer graphene materials. Many industries could take advantage of this, from builders of aircraft and boats to skyscrapers, where low-ice adhesion is essential.”

“Airplane manufacturers do not want ice forming on their wings , ship captains do not want drag from ocean water slowing them down, and biomedical devices need to avoid biofouling, where bacteria builds up on wet surfaces,” Higgs says. “Robust, long-lasting superhydrophobic surfaces produced from this one-step, sand-in method can alleviate many of these problems.

“A limitation of other techniques to generate hydrophobic surfaces is that they do not scale up to large surface areas such as those on planes and ships,” he says. “Simple application techniques like the one developed here should be scalable.”

Rice graduate student Weiyin Chen, co-lead author of the new paper, says the Tour lab has also applied its sand-in technique to various metal surfaces including, as reported in another recent paper, lithium and sodium foils for metal batteries.

“The spontaneous chemical reactions cause the formation of tribofilms, in this case, the artificial solid electrolyte interphase,” Chen says. “The modified metals can be used as the anodes for rechargeable metal batteries.”

The research appears in the journal ACS Applied Materials and Interfaces .

The Air Force Office of Scientific Research supported the research.

The post Sanding trick gets water to slide right off surfaces appeared first on Futurity . 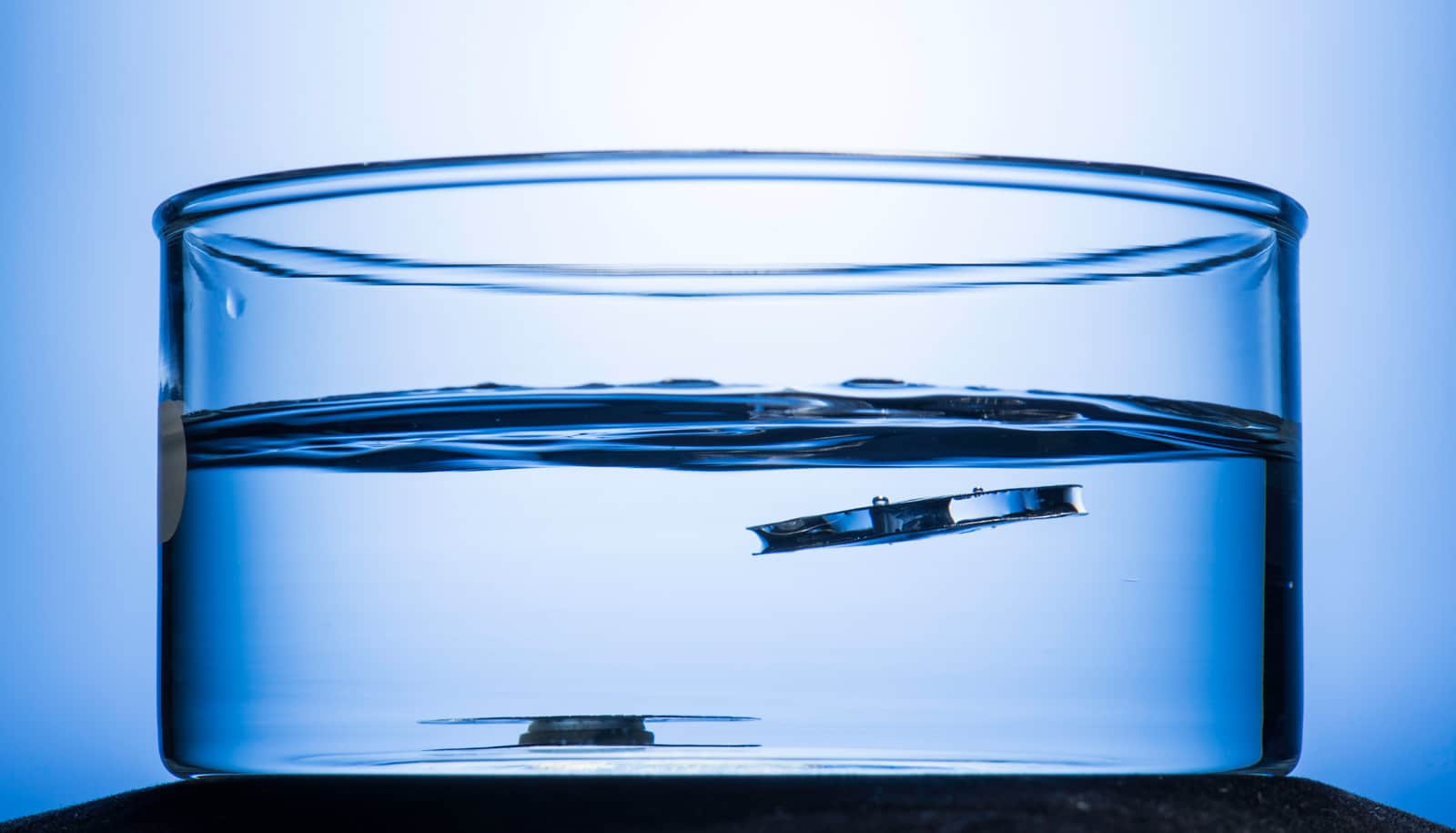 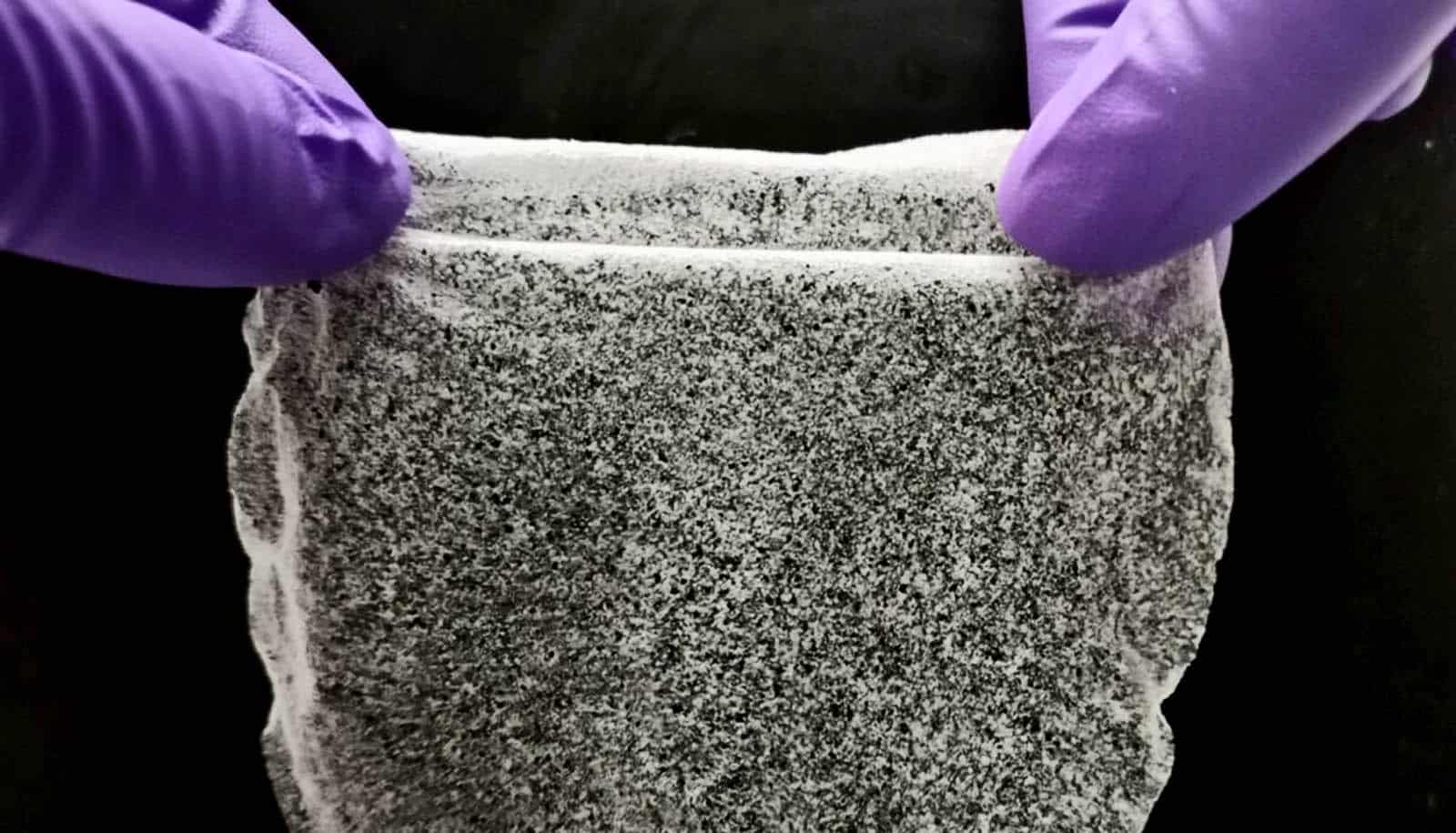