As part of its commitment to expand research, development, and education in a scientific field that will underpin the next generation of innovative materials and devices for high-speed computing, networking, and ultra-precise sensing, the University today launched the Harvard Quantum Initiative ( HQI ).

The initiative is intended to bring together a new scientific community, in concert with national efforts to accelerate progress in quantum technology.

“The Harvard Quantum Initiative will support excellence on the ever-shifting frontiers of science and engineering,” said President Larry Bacow. “The diversity of expertise among our faculty creates a nutrient-rich environment in which this emerging discipline can flourish, and I am excited to see the ways in which collaboration with other partners speeds progress.”

The ability to manipulate matter on the quantum level has implications for everything from the production of oxygen in plants to understanding the fundamental nature of the universe. Quantum sensors, materials, and computing could transform society, but the full range of quantum applications and their impact remain open questions.

GAZETTE: The quantum revolution is here. How will it shape our future?

DOYLE: Predicting things doesn’t often work well, as history shows us. However, if you trace any of the major changes that have occurred in our technological society, they often started with a tool that was much better than what was done before. No one knew exactly what it would be good for but invariably it led to something amazing.

HU: We like to use an analogy with another “revolution maker”: the transistor. Researchers who worked on the idea may have had a vision of its possible importance, but they had no idea that their first, ungainly prototype would be the progenitor for switches the size of a few atoms. They couldn’t have known that it would start the information revolution that you see all around you, with laptops, tablets, and smart phones everywhere you look. Quantum is the same: It’s a new frontier that we sense is of enormous importance but are only just starting to comprehend.

LUKIN: New developments in quantum science are meeting the emerging field of quantum engineering, and that means we can start transforming theories into useful systems and devices. Many different fields are all converging to form this new discipline, and at Harvard we have extraordinarily strong expertise in each of them. The Harvard Quantum Initiative lets us take full advantage of this to really push the frontiers of science and innovation.

Quantum computer built by Lukin and a team of researchers.

GAZETTE: Let’s start with the basics. What is quantum engineering?

LUKIN: Our experience of the physical world is pretty consistent, right? But at the atomic level Newton’s laws break down, and just about everything can be described as both a particle and a wave. Particles you can picture as electrons whizzing around a nucleus — the classic drawing. Waves are conceptually different — they can interfere with each other in a way that particles usually don’t. So reality in the microscopic world is very weird.

HU: In principle, any object, like this table, can be in multiple places — say, Boston and New York — at the same time. You have to suspend your disbelief for a moment and accept that on some level, this table is both here and there. That “coherent superposition” of the states of the table is a profoundly different way of viewing information transfer. Companies are increasingly beginning to invest in that idea so they are ready to exploit it.

LUKIN: This isn’t some kind of obscure observation. Over the past 100 years, many experiments have shown that coherent superpositions occur so often that it is accepted as simply the way things are. There are already technologies out there that make use of these effects. Quantum sensors use them to build measurement devices, for example to perform extremely high-resolution MRI experiments. That might seem like a small thing, but small things can be completely disruptive for entire industries.

LUKIN: Computers are among the most discussed applications of quantum technologies, but there are very exciting scientific frontiers being opened up across many fields. Quantum science and engineering can help us understand the fundamental nature of our universe and explore complex physical and chemical phenomena at a level we could not have imagined before. All of these developments are enabled by the ability to fully control systems and devices all the way down to the single-atom level.

DOYLE: We are able to control the quantum “weirdness” in a way we weren’t before. Transistors wouldn’t have worked without quantum effects — but that’s billions of electrons behaving as a kind of swarm. Now, we’re manipulating single electrons to act in a highly specific way. That is much more powerful and you can do a lot more with it than build computers. When biologists use tools out of physics, like they will with quantum, medicine is never too far behind.

LUKIN: Quantum super-positioning makes it possible to process information in an entirely new way, and to run large number of queries in parallel.

DOYLE: For me, the most exciting thing is that we can explore the limits of controlling the quantum world. We can ask, how big a fully controlled object can we make? If we can control each quantum particle in a machine that is bigger than 10‒50 atoms, we’ll have something with immense computational power. That’s why we think quantum is going to be revolutionary.

HU: Just think, if you really had that degree of control over electrons, over spins, over atoms in a crystal or in gas phase, you could basically control the exchange of energy at an enormously sensitive and precise level. You could make devices of unparalleled energy efficiency in addition to doing all the magic things that quantum mechanics promises.

GAZETTE: You’ve been working on quantum concepts and devices for a while. Why launch an initiative now? Why Harvard?

DOYLE: It’s very simple: The technology has got to the point where we can control single quantum objects, put them together in a way that resembles a computer, and run a kind of simulation. In the next five years we see these tools exploding the possibilities of doing science and engineering.

HU: Harvard has an excellent, long-standing record of contributions to quantum science. In addition, natural collaborations in quantum have arisen from Harvard researchers working in science and engineering. These have already borne fruit and broadened the reaches of our “quantum frontiers.”

LUKIN: Many of the truly pioneering developments in quantum science and engineering happened in laboratories here in Cambridge at Harvard and at MIT. Working together to solve challenging problems helps enormously in terms of progress and productivity, and we have a long tradition of doing that.

HU: Now is the time to move on investing in quantum science and engineering. Some large companies are beginning to invest in quantum computation, but there is an enormous amount of basic science that still needs to be done, from new quantum algorithms to clarifying the engineering complexities for quantum systems. We also need to formulate the right educational infrastructure to train future professionals in this field. Harvard has committed to building momentum in quantum science, engineering, education, and business so we can knit together a strong community of students, faculty, and inventors who share a common vision and enthusiasm.

GAZETTE: You talk about students being future leaders. How will the Harvard Quantum Initiative affect them?

LUKIN: Our most important mission at Harvard is to educate students. And in this new field, we need a new generation of scientists and engineers who can work across the borders between traditional disciplines.

HU: It’s no longer good enough to just borrow little bits and pieces from different departments. It’s time to re-examine not only how we do research, but how we teach. There was a time when there was no computer concentration — just physics and math. Then something changed, and now computer science is one of the concentrations most espoused by young students. Changes like that happen because the intellectual frontier is never static. New areas of inquiry and exploration are always opening up at the interfaces of fields of study, and that is what’s happening with quantum engineering and science.

DOYLE: Education is the reason I’m at a university. We teach students how to learn and think critically, using subject matter — physics, biology, the classics — as a kind of humus in which they can grow. In that sense, we’ll do what we always do at Harvard: train our students for the future, hone their intellectual skills, and broaden their horizons, now using the latest ideas from science and engineering.

GAZETTE: Why work with industry?

LUKIN: Quantum technologies are fueling a number of startup companies, but at this point in time, no one knows how to build truly large-scale quantum computers. And people don’t know what they would be useful for, even if we could build them. But this is what always happens with truly disruptive technologies. The scientific and technological challenges in front of us are significant, and to address them it’s very important for scientists and engineers to work together.

DOYLE: One of our goals is to create those channels of communication and spark new collaborations with companies. They bring quite a lot to our educational enterprise. To make those connections they need a place to go, and we need to be able to understand what they can do — and what they’d like to do — in this area. HQI is primed to do exactly that.

GAZETTE: Does this mean you’re going to be collaborating with startups?

HU: We’ll be collaborating with all kinds of companies, of all sizes. Quantum has the potential to change business models across industry, to change things for everyone.

LUKIN: For quantum to emerge as a real presence for the common person — and for the common person to benefit — we need to collaborate and raise the bar across the board. This is not the kind of task that one of us is going to solve on his or her own. Building community is essential. Our initiative is about melding the capacities of universities, government labs, established companies, and startups. It’s absolutely not the case that we’ve finished with the basic science and now it’s just an engineering task to build these devices. The foundational science that will allow us to build practical quantum devices still needs to be done — it’s still ahead of us.

HU: And that is really exciting.

This interview has been edited for clarity and length. 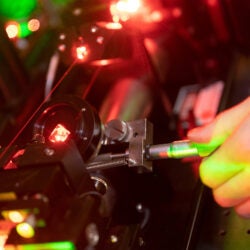