Bumphead parrotfish poop helps clarify the relationship between the fish and the reefs they call home. 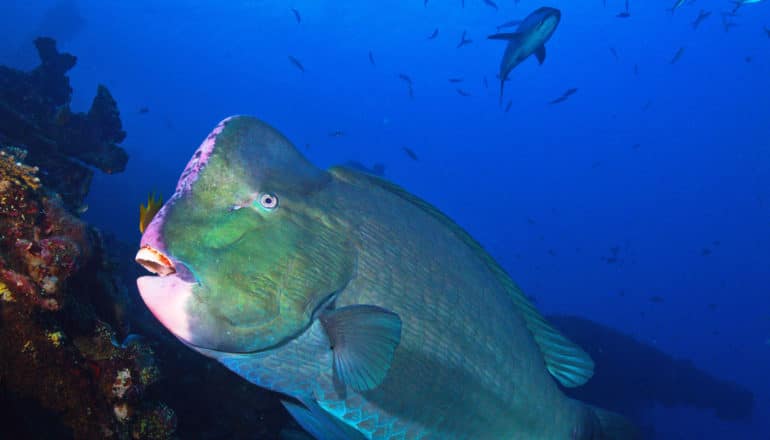 New research clarifies the relationship between bumphead parrotfish and the reef environments they call home.

“They’re underwater elephants,” says Grace Goldberg of the University of California, Santa Barbara, and lead author of the paper in Coral Reefs.

Similar to the huge land mammals, bumphead parrotfish (Bolbometopon muricatum) are enormous. Reaching 1.4 meters (over 4.5 feet) in length, they are the largest fish of their type and among the largest of coral reef fishes.

Like elephants, each one consumes a large volume—between 4.48 and 5.69 tons annually—of relatively low-quality food and subsequently excretes lots of waste, the sheer amount of which shapes their environment, and, in the case of the tropical fish, gives nearby white sand beaches their defining feature.

“We think about coral reef systems as these stressed systems under climate change,” Goldberg says. “And these fish, because they’re so big, drive a lot of reef processes through their interaction with the coral and the physical reef environment.”

Understanding how they forage would offer a better picture of the complex dynamics that shape the reefs and the communities they support, researchers say.

But while it’s common knowledge that environments and the species therein influence each other to some degree, the new study defines the extent of this relationship at a molecular level, with results that add new perspective to the study of coral reef ecology.

“What do we know about the raw materials of what they’re ingesting and what they’re pooping out?” Goldberg says. To find out, researchers collected fecal samples while swimming behind B. muricatum at the Palmyra Atoll in the heart of the Pacific Ocean.

Researchers also sampled live coral (with polyps) and coral rock (just the hard skeleton) bites in the process, using a chisel and calipers to remove a bite-sized chunk for analysis.

Then they turned to materials science. Using a differential scanning calorimeter, they probed their samples for their energy content, the same way chemists and materials scientists might investigate the energy content of coal and other fuels. They also used an elemental analyzer to determine the presence of nutrients and other elements relevant to the fish and the reefs.

The results? Coral rock, it turns out, contains about three times as many calories than live coral does. While the coral rock is considered “dead,” Goldberg says, other organisms colonize and recolonize the stony structures.

“It actually carries more nutrition and is full of life and full of calories,” she says. More work is necessary to understand what quantity of the nutrients the fish actually absorb into their tissues, which may shed light on their foraging habits, she says.

At the other end, bumphead parrotfish feces, unlike that of other fish and marine organisms, didn’t generate any significant impacts on the chemistry of their coral reef environment.

The findings contribute to a growing body of knowledge of coral reef ecology, researchers say. The role of bumphead parrotfish in particular is complex. Their feeding habits contribute to the health of the reefs by consuming algae that compete with coral polyps for surface area.

The fish also open up space and fragment the corals, which allows polyps to spread and colonize other sections of reef, helping with reproduction.

But, their consumption of large amounts of coral and the potential of their impressive amount of feces to smother parts of the reef could also be cause for concern, especially in an era of shrinking coral reefs.

Because they exert such a huge effect on the reefs they live in and feed on, they present an ecological puzzle to those who work to conserve the vulnerable fish and their sensitive, shrinking environment, researchers say.

“We wanted to understand why it eats what it eats and what the implications of it might be for their environment,” Goldberg says. “We’re trying to understand it in a really holistic way.”

Additional researchers from UC Santa Barbara, Stanford University, the University Miami, Briggs of University of Georgia, and the Carnegie Institution for Science contributed research to this study.

The post ‘Underwater elephants’ give and take with coral reefs appeared first on Futurity. 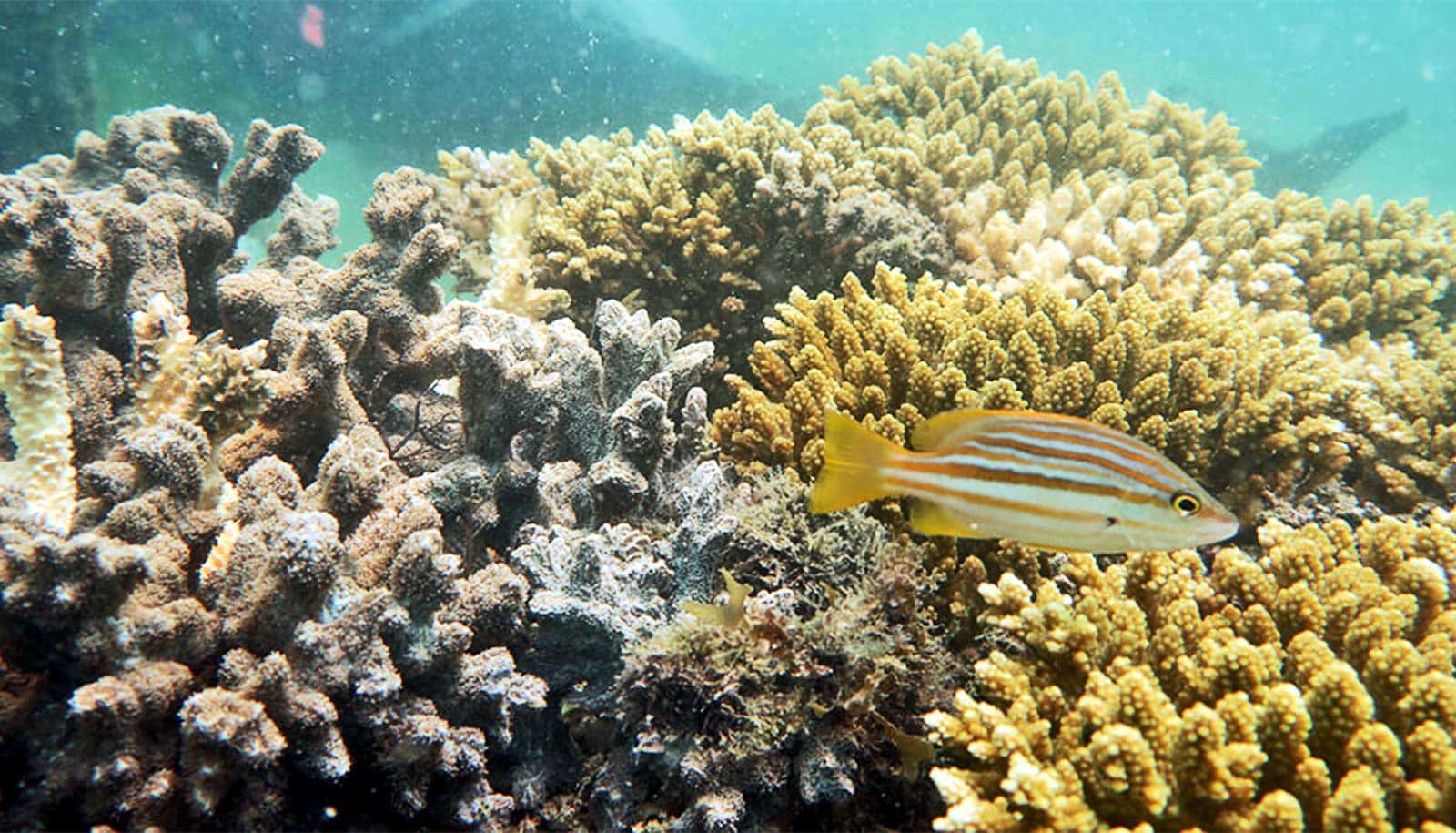 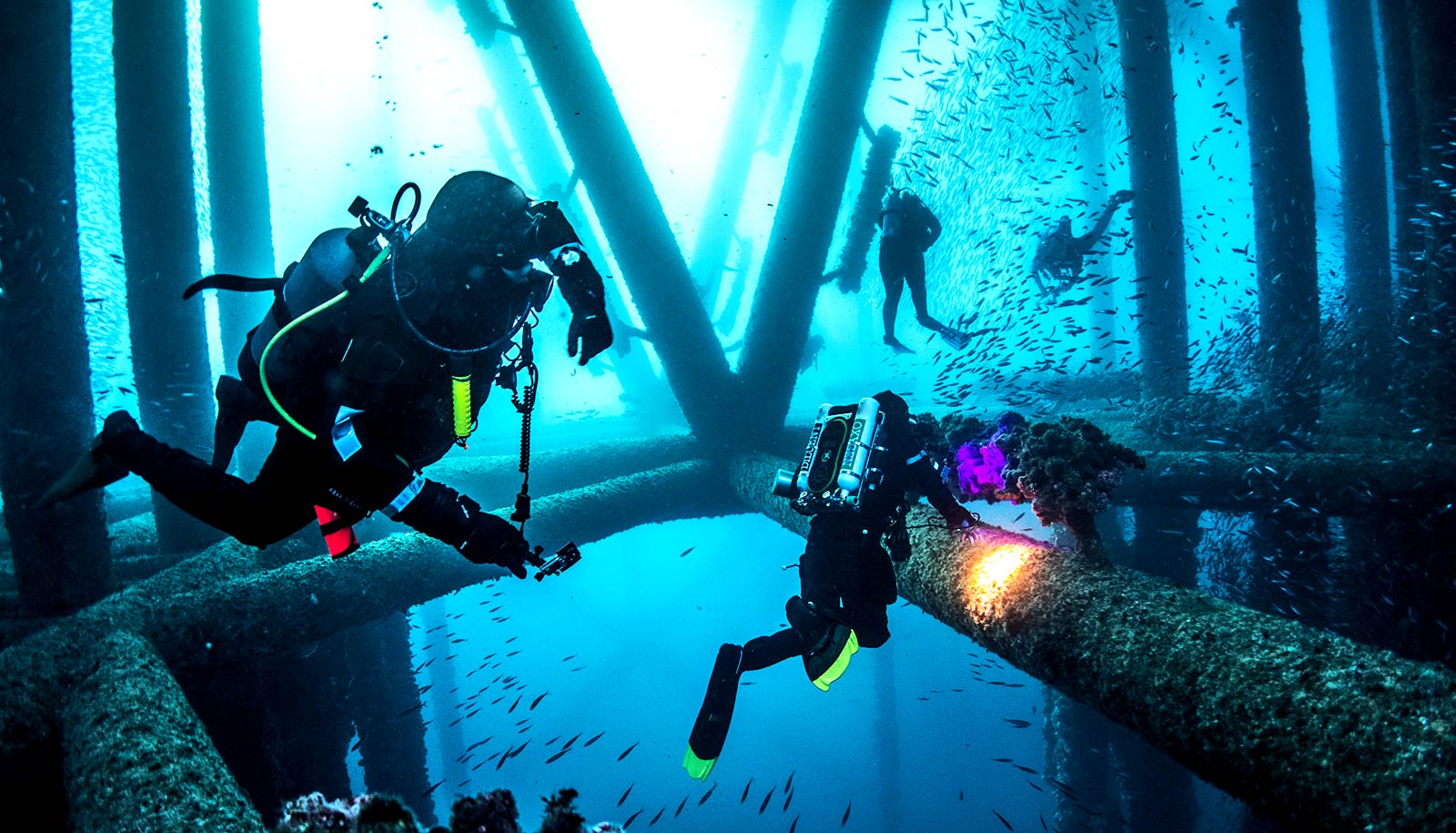