Why are Nike trainers washing up on beaches?

From Bermuda and the Azores to Ireland and France, large numbers of shoes are washing ashore.

Over the past year, from Bermuda and the Bahamas to Ireland and Orkney, hundreds of pairs of unworn shoes have washed up on beaches. But how did they get there, and why are scientists so interested in where they are being found?

At first they appeared in small numbers and could be dismissed as ordinary artefacts lost by individuals - mere flotsam among the churn of man-made waste that inhabits the world's oceans.

Soon, though, it became clear these Azorean arrivals were part of a greater group.

Trainers, flip-flops and a selection of other footwear were appearing with a regularity that singled them out from the other tidal deposits.

They were the same brands, in the same styles, and, for some of the trainers at least, the same production dates were printed on a label sewn into the tongue of each shoe. Moreover, every item of footwear appeared to have been unworn.

In the months that followed, Mr Ribeiro retrieved about 60 Nike trainers, along with a host of other brands.

News of the findings began to spread.

"A friend in Ireland asked me if I had found any," says Ms Williams. "I went out the next day and found quite a few.

"Beach cleaners or beach-combers tend to network, so if a certain item is washing up, we quickly find out about it and we're then on the lookout."

As well as the Azores and south-west England, specimens of this scattered footwear flotilla have so far been found on beaches in Bermuda, the Bahamas, France, Ireland, Orkney and the Channel Islands.

The source of all these shoes is believed to be a single ship.

"Through the research I have done," Mr Ribeiro says, "everything indicates they may have been from some of the 70 to 76 containers that fell overboard from the Maersk Shanghai."

In early spring last year, the Maersk Shanghai - a 324m (1,063ft) vessel capable of carrying more than 10,000 shipping containers - was travelling from Norfolk, Virginia, down the east coast of the US to Charleston, South Carolina.

On the evening of 3 March - 17 miles from the Oregon Inlet, off the coast of North Carolina - it was caught in a storm. While battling high winds and rough seas, a stack of its cargo-laden containers toppled overboard.

At the time, the maritime trade press reported that aircraft crews sent to locate the missing containers had found nine of them floating, but that seven had later sunk.

It is not possible to say with certainty all the recovered footwear originated from the Maersk Shanghai - the vessel's operator Zodiac Maritime did not respond to BBC questions on the matter. Nike also chose not to comment when contacted.

However, two footwear brands, Triangle and Great Wolf Lodge, confirmed the examples of their products that had been retrieved did originate from the ship.

And Mr Ribeiro is not the only beach cleaner to be convinced they came from the Maersk Shanghai.

Liam McNamara, from County Clare, on the west coast of Ireland, has found "well over 100" shoes - mostly Nike trainers - that in his opinion "most definitely" came from that vessel.

"They've been turning up all over the place."

"Whatever it is - if it is sinking to the bottom or washing up on beaches - it's going to have a detrimental impact to the marine wildlife," says Lauren Eyles, from the Marine Conservation Society.

"The shoes will be breaking down to micro-plastics over years, which will have huge impacts on the amazing wildlife we have both in the UK and worldwide."

Estimates vary, but it is thought about 10 million tonnes of plastic end up in the oceans each year.

Asked how big a role container spills play in that pollution, Ms Eyles says it is not fully understood.

"I don't think there's enough data on it to draw proper conclusions," she explains.

The World Shipping Council estimates that of the 218 million containers transported annually, just over 1,000 go overboard. But one oceanographer, who worked with Nike helping to clear up a spill of its shoes in the early 1990s, believes the real number is likely to be higher.

"It's a number the industry likes to dispute," says Dr Curtis Ebbesmeyer. "I think it's in the thousands of containers annually. The question really is: what's in them?"

It is at least possible in this case, Dr Ebbesmeyer says, to estimate the size of the spill.

Despite the environmental damage, scientists can salvage something from such incidents - a better understanding of our oceans and the currents that drive them.

While many of the shoes from the Maersk Shanghai have been washing up on beaches, far more are likely to be doing laps of the North Atlantic ocean, stuck in a network of powerful currents.

When and where the shoes appear, Dr Ebbesmeyer says, can tell us how fast the currents are moving.

"If they've gone about halfway around [from North Carolina to the UK] in just over a year, then it takes about three years to go once around the North Atlantic. So that's the typical orbital period of the sneakers, but that hasn't been studied by oceanographers much at all."

Even more enlightening, Dr Ebbesmeyer says, is how the shape of the shoes seems to dictate where they end up.

"The left and the right sneakers float with different orientation to the wind," he explains. "So when the wind blows on them they will go to different places. So on some beaches you tend to get the left sneakers and on others you get the right."

Despite the criticism of the commercial shipping industry, Dr Ebbesmeyer believes it has started to clean up its act. But he says more could be done.

"I think companies that have spills think we will just forget about it - but it just keeps washing up. So how do we hold companies responsible? Right now there is no accountability."

Part of the problem is that shipping companies only have to report lost containers if they could become a hazard for other vessels or if they include substances deemed "harmful to the marine environment", such as corrosive or toxic chemicals.

While the Marine Conservation Society says products like trainers harm marine environments, they do not count as "harmful" for the purpose of reporting cargo lost at sea.

The International Maritime Organization - the UN's shipping regulator - told the BBC it recognised "more needs to be done to identify and report lost containers" and it had "adopted an action plan to address marine plastic litter from ships".

For Ms Williams, who goes down to clean beaches near her home in Newquay, Cornwall multiple times a day, there is no easy solution.

"Nobody wants their goods spread across beaches and polluting the ocean," she says. "But I think it would be good if companies could be more open about cargo spills - if they could put their hands up and say: 'Yes there has been an incident.'"

"These things are going to happen, but there doesn't seem to be any responsibility when they do," Mr McNamara adds.

"The bottom line has to go back to the shipping companies; they're responsible for their cargo."

All images subject to copyright. 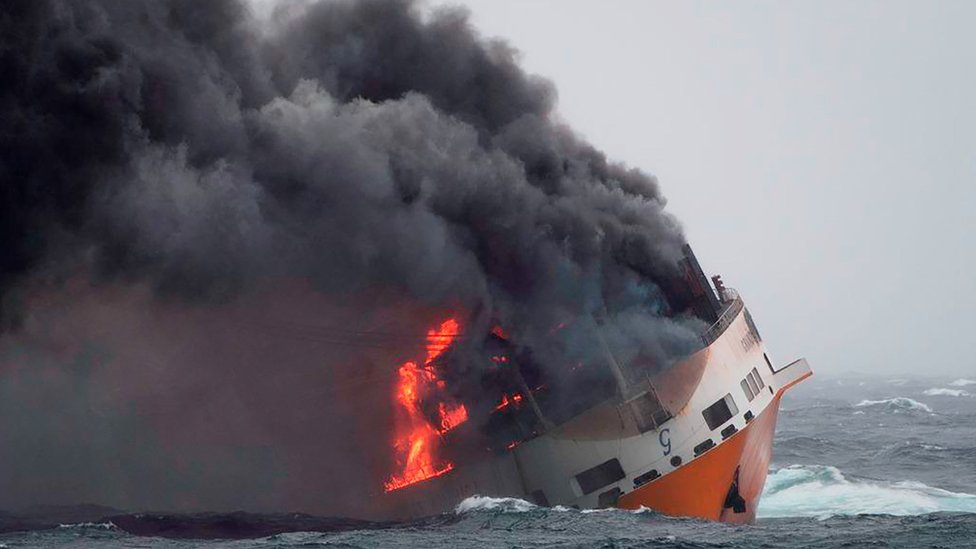