‘Tear down this wall’ was almost cut from Reagan speech

President Ronald Reagan's 1987 call to Soviet leader Mikhail Gorbachev to "tear down this wall" came close to being left unsaid. 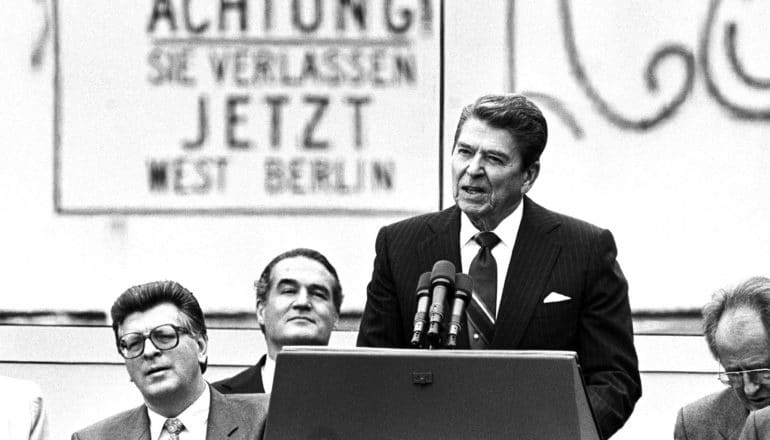 For the 30th anniversary of the fall of the Berlin Wall, Ronald Reagan’s former speechwriter shares what inspired those now famous words—”Mr. Gorbachev, tear down this wall”—and how they almost didn’t make it into the speech.

State Department and National Security Council advisers found the passage outlandish and provocative, says Peter Robinson, a Hooper Institution fellow at Stanford University. In one case, a White House official thought it was even unpresidential, he recalls.

But after the Berlin Wall toppled—30 years ago, on Novevmber 9, 1989—Reagan’s words, delivered not two years earlier on June 12, 1987, came to define a turning point in US-Soviet relations. What was once deemed audacious had become auspicious.

“The speech became retroactively prophetic, if that makes sense,” says Robinson. “Once the wall fell, the speech seemed to have summed up and even predicted the final phase of the Cold War.”

At the time the wall fell, Robinson had left the White House and was a graduate student at Stanford Graduate School of Business.

“I can remember driving from the business school to the house I was renting with three other buddies in Portola Valley and I had the car radio on. I came back to the house and turned on the television and left it on for hours,” Robinson says. “I felt astounded. I never actually expected the wall to come down that quickly.”

Two years earlier, Robinson had been working for Reagan as one of his speechwriters. He was assigned to write the remarks Reagan was to deliver at the Brandenburg Gate, an 18th-century monument that formed part of the Berlin Wall.

Built in 1961 by the German Democratic Republic (GDR, or East Germany), the Berlin Wall cut off access from East Germany to the neighboring West German enclave deep in the communist state.

“West Berlin, this little pocket deep inside East Germany, was a modern city. People were well dressed, there was this sense of color and activity,” recalls Robinson, who traveled to West Berlin in 1987 with the president’s team responsible for planning the impending trip.

The first thing Robinson and the team did when they arrived was visit the Brandenburg Gate.

There, Robinson climbed a set of steps to an observation platform that looked into East Berlin. As he peered into the communist state, “It was though the color had drained from the camera,” he says.

“There was a feeling that everything was in a state of disrepair and badly maintained, but turn around and you saw color, activity, people going places. And then you looked back to East Berlin and you saw this kind of strange, colorless void.” He recalls thinking, “What can I possibly write that would give the president material equal to this place?”

Feeling despondent, Robinson hoped that his next meeting with a high-ranking American diplomat would provide him the material needed for the speech. But that too was unhelpful, Robinson says.

“He was full of ideas about what Reagan should not say,” Robinson says, including under no circumstance was Reagan to make a big deal about the Berlin Wall. “They’ve gotten used to it by now,” the diplomat said.

It was not until Robinson broke off from the advance team to join a group of Berliners for dinner that he finally found inspiration. Robinson, astounded by the wall’s omnipresence, asked his dinner companions if they had—as the diplomat insisted—really become used to the 27-mile barricade that enclosed their city.

“There was a silence. And I thought, I committed just the kind of gaffe that the diplomat wants the president to avoid. They looked at each other and one man pointed and said, ‘My sister lives just a few kilometers in that direction but I haven’t seen her in more than 20 years. How do you think we feel about that wall?'” Robinson says.

For the rest of the evening, the guests shared their experiences. Robinson realized that Berlin residents had simply stopped talking about the wall rather than become used to it.

The evening’s hostess, Ingeborg Elz, told Robinson that if Gorbachev was serious about reforms, he could prove it by coming to Berlin and getting rid of the wall, Robinson says.

“I knew at that moment that if the president had been there in my place, he would have responded to that remark, the decency of it, the simplicity, the power, the truthfulness of it,” he says.

But Robinson—along with his bosses, chief speechwriter Anthony Dolan and Director of Communications Thomas Griscom—wanted to get Reagan’s take on it first. With a little stealth, they snuck a draft to Reagan at the end of an especially busy week before anyone else could see it.

That Monday, when the team met with the president, Griscom asked Reagan if he had any thoughts about Robinson’s speech. All Reagan said was that it was a good draft, Robinson recalls.

Robinson then stepped in, telling the president that people in East Berlin would be able to hear him speak. Depending on weather conditions, Moscow radio might even pick up the speech. Robinson asked if there was anything Reagan wanted to convey to the people listening from the other side.

“And the president said, ‘Well, there’s that passage about tearing down the wall. That’s what I want to say to them. That wall has to come down.'”

For the next three weeks, the National Security Council and the State Department went back and forth with the White House communications team to change the speech. Seven alternative drafts did not include the call to tear down the wall.

But Robinson was determined.

“I now look back and think, ‘What was I thinking?’ I was 30 years old, I had been to Berlin for a day and a half, and I was convinced that I knew better than all the foreign policy experts in the US government about what the president should say. But I was convinced.”

While Robinson acknowledges writing the speech, he says the speech is Reagan’s. All he did was try to reflect Reagan’s policies and positions. Only Reagan could have said those words because it was what he truly believed, Robinson says.

The post ‘Tear down this wall’ was almost cut from Reagan speech appeared first on Futurity.