"One of the most critical and conspicuous ways that diversity is changing is by changing the distribution of species across space." Bird "census" data indicate the risks. 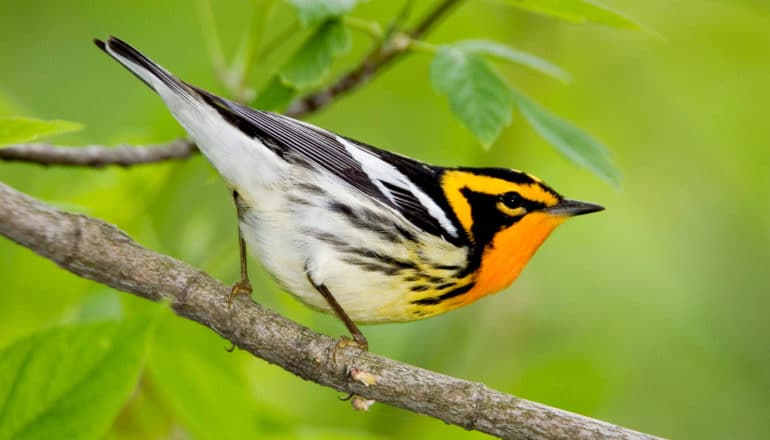 The new study finds that the regional stability of ecosystems over time depends on both the total number of species present in a locality and on the variation in species identities among localities.

“Changes that lead to something like biotic homogenization could be destabilizing for ecosystems, even if it doesn’t lead to the loss of species.”

The results have implications for maintaining a diverse portfolio of local species in the face of major environmental threats—like climate change, biological invasions, intensifying land use, and other human and natural disturbances. The study appears in the Proceedings of the Royal Society B.

“Species diversity is changing in more complicated ways than just going up or down, or the total number of species,” says lead author Christopher P. Catano, a recent PhD graduate of Washington University in St. Louis and current postdoctoral research associate at Michigan State University. “One of the most critical and conspicuous ways that diversity is changing is by changing the distribution of species across space.”

Recent high-profile studies have tried to show how and why biodiversity is changing at regional to global scales. Scientists have sounded alarms about net losses of insect, fish, bird, and plant species. Many fear that such losses may alter the functioning of ecosystems and upend their ability to provide critical goods and services that humans rely on.

“The study provides some of the first evidence to suggest that local biodiversity loss and biotic homogenization will impact the functioning and stability of ecosystems at macroscales,” says Jonathan Myers, associate professor of biology at Washington University in St. Louis.

The greater the number of species in an ecosystem, the more that ecosystem tends to be stable. The general reason why this happens is something called an insurance effect.

In concept, it’s similar to why investors might want to have a diverse set of stocks in their portfolio. If one stock performs poorly, there’s a chance that it will be buffered by others that perform better than expected.

“Over time, these different stocks—or these different species, in the context of an ecosystem—can compensate for one another,” Catano says. “The fact that species may respond differently to the same environmental change is what gives that insurance effect.”

This idea is widely accepted by biologists. The basic mechanism has been confirmed by lots of studies over time, and it underlies many arguments to promote or conserve biodiversity.

But it’s not without its limitations. For example, much of the supporting research was conducted at a relatively small scale. One notable experiment was completed on plots of land that measured only about half as long as a bowling alley, each neatly planted with varying numbers and species of seeds.

Real life is not so clean. The ground is not perfectly flat, rivers cut through breeding areas, and animals and seeds travel across large areas. Ecosystem management often occurs within and across large tracts of land.

“At larger scales, it’s not just the number of species that’s potentially varying, it’s also the identity or the composition of those species across space,” Catano says.

“So there are two components to regional stability,” Catano says. “One is how stable your average local community is. And the second is how differently those local communities respond through time—relative to each other.”

Catano and Myers decided to try to test the relative importance of these two factors—the number of species, and the amount of site-to-site variation in species composition—in determining the stability of ecosystems at a larger scale.

The researchers used 20 years of observational data from the North American Breeding Bird Survey, a joint effort of the US Geological Survey and Environment Canada. They focused on 342 species of songbirds in 1,675 breeding bird “communities”—the census-block-like geographic units routinely sampled in the Breeding Bird Survey—distributed across 35 large bird-conservation regions.

The researchers used the production of total bird biomass over time as their measure of ecosystem stability.

They found that species count does matter for stability—but site-to-site variation in species composition matters three times as much at the larger geographic scale of bird conservation regions.

And what happens at a larger scale with birds is likely to affect humans, too. “Birds are major consumers of insect pests that limit production of plants and therefore ecosystems. Also, a lot of plants are dependent on seed dispersal by birds,” Catano says. “There’s a lot of critical services that are mediated by birds.”

The results have implications for conservation, the researchers say.

Land use managers have a key role to play in promoting variation across an area, the researchers say, by taking advantage of management techniques that introduce or maintain environmental heterogeneity.

“An example might be through grazing,” Catano says. “Animals graze somewhat patchily, and those patches create meaningful variation in the composition of other species. Fire management, or controlled burns, is another measure that, when done appropriately, can increase the resource heterogeneity in an ecosystem.

“These are things that land managers and conservation practitioners are already doing,” he adds. “This just cues them into this other dimension of biodiversity that’s often overlooked when they assess the success of their restoration or management effort.

“Changes that lead to something like biotic homogenization could be destabilizing for ecosystems, even if it doesn’t lead to the loss of species.”