Male fruit flies need to be aroused to ‘see’ females

A male fruit fly will chase a female for more than 26 yards—that's 9 miles—vibrating its wings in a fruit fly love song. But first he needs to be aroused.

In a new study, researchers dig into how a male fruit fly’s brain being in a state of arousal lets them see female flies.

Fruit flies have evolved an elaborate courtship ritual. Upon recognizing a suitable mate, a male fruit fly transforms into a dogged suitor, sometimes chasing the female for more than 26 yards, or 9 miles in human terms, singing to her all the while by vibrating his wings.

For the male fruit fly to recognize a mate and begin pursuit, however, he needs to be aroused. Otherwise, he acts as if he’s blind to the female’s presence.

The new findings in Nature describe a sort of neural switchboard in the fruit fly’s brain that reroutes sensory information to produce different responses.

“This is a fundamental question in neuroscience,” says Vanessa Ruta, associate professor and head of the Laboratory of Neurophysiology and Behavior at Rockefeller University. “How are brains able to switch the way that they react to the same stimulus?”

Recently scientists found that a small cluster of about 20 neurons, known as P1 neurons, triggers a male fruit fly’s transition from being blind to a female to vigorously chasing her.

“P1 neurons act like a switch that puts the fruit fly into a state of sexual arousal,” Ruta says. Indeed, several teams have been able to kick-start courtship behavior in a male fruit fly by artificially activating his P1 neurons, inducing him to chase even inanimate objects.

To take a closer look at what these neurons are doing, the team prepared a fly-size virtual reality setup: A male fruit fly is tethered to a little foam ball floating atop a stream of air. In front of him, on a curved screen that covers his entire field of view, researchers project a moving dot as a stand-in for a female fruit fly.

When the male begins walking towards the fictive female, spinning the foam ball in the process, a camera tracks his movement and an overhead microscope records his brain activity.

Like many animals, fruit flies use pheromone signals to identify suitable mates. But Ruta and colleagues found that visual cues alone are enough to initiate courtship. When the researchers projected a dot moving simply back and forth on the screen the fly remained indifferent, but when the dot started to mimic the natural motion of a female fly, moving closer and further away, the male fell for it. P1 neurons lit up and the fruit fly began running towards the dot and flapping its wings.

“The sight of something moving about like a female is sufficient to generate the state of arousal and cause a male fruit fly to spring into action,” says graduate student and first author Tom Hindmarsh Sten.

Next, the team found that P1 neurons establish a link between vision and action.

During P1 activation, visual neurons communicate with the fly’s motor system, enabling him to follow his target. Without P1 activation, however, the connection is broken and the fly ceases to use this visual-motor pathway entirely. He is, for all intents and purposes, blind to the existence of the female fly. “It essentially activates a visuomotor circuit that otherwise lies dormant,” Ruta says.

The question of how flies become aroused in the first place—kicking off a visuomotor cascade in the brain and allowing them to see and pursue a mate—remains to be explored.

Researchers suspect that the P1 neurons determine on a moment-to-moment basis whether it is an appropriate time to be aroused, or stay aroused, by integrating signals from the environment, and perhaps even the fruit fly’s own internal physiological state such as hunger or tiredness.

“This design ensures that the fruit fly doesn’t engage in courtship all the time, but only under the right conditions,” Ruta says. “In this way, a behavior like courtship, which is genetically programmed, can be at once robust and flexible.”

The post Male fruit flies need to be aroused to ‘see’ females appeared first on Futurity . 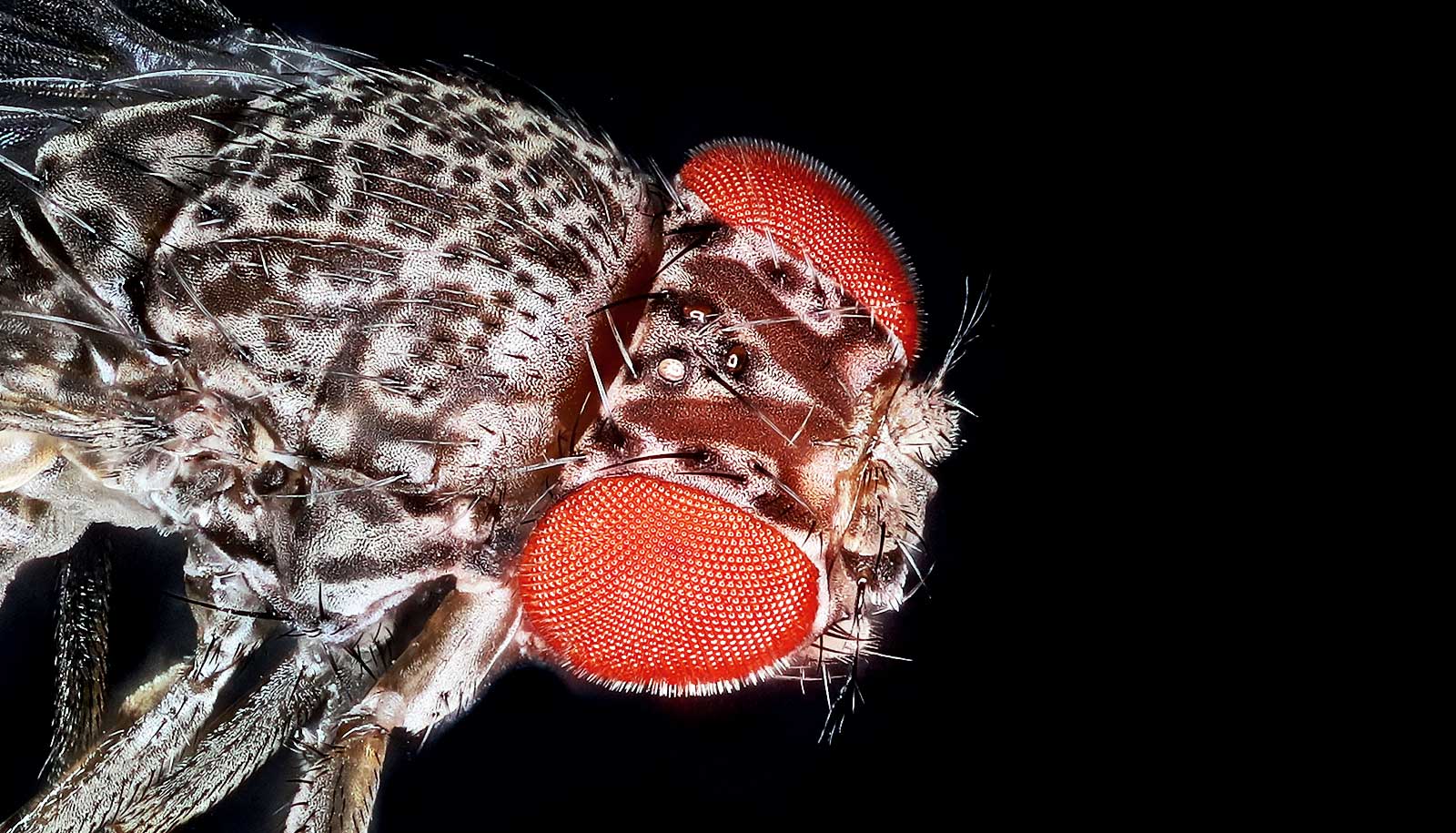 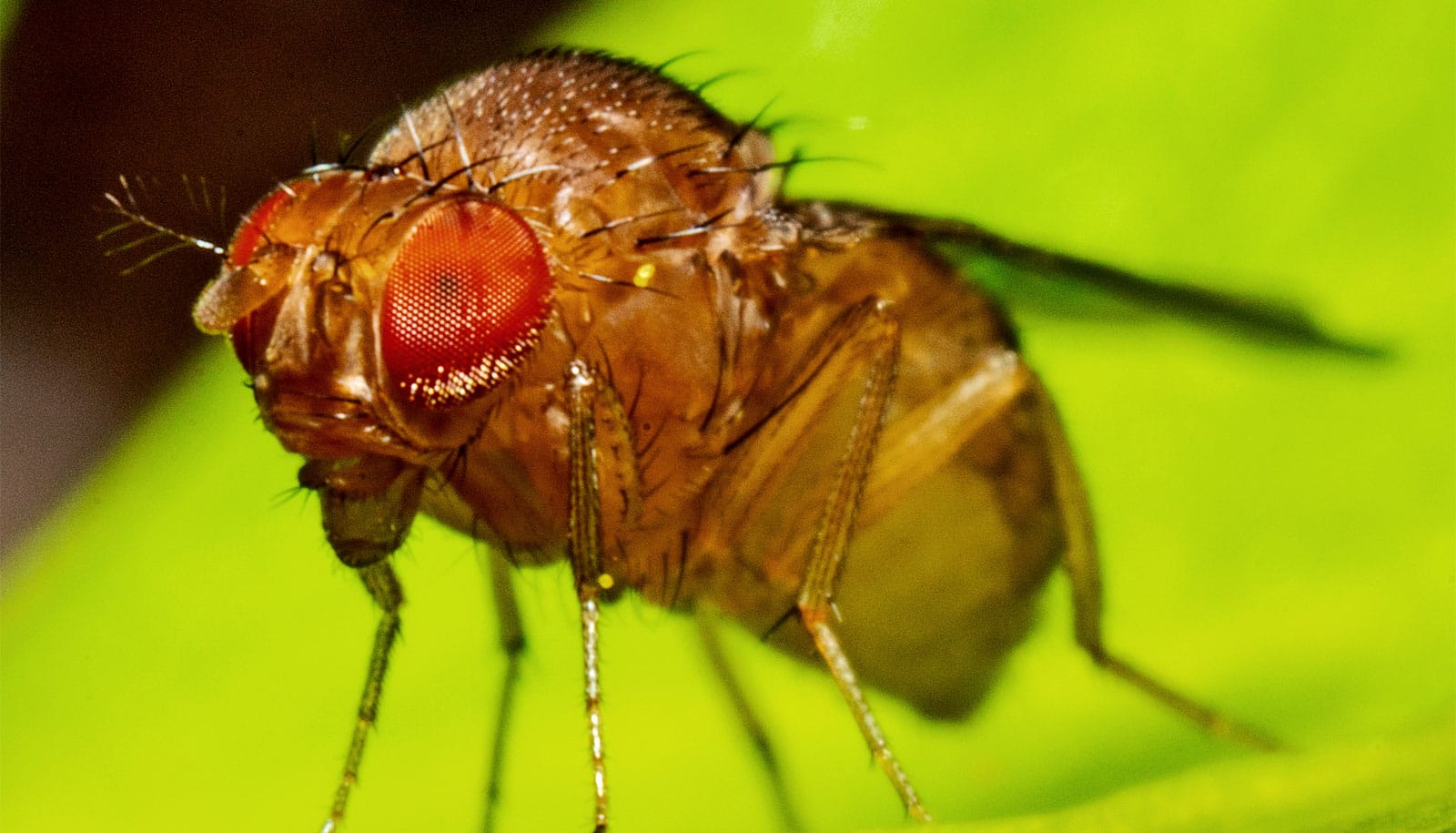 Fruit flies and mosquitoes are a lot brainier than people think