Explained: Why perovskites could take solar cells to new heights

This family of crystalline compounds is at the forefront of research seeking alternatives to silicon.

Perovskites hold promise for creating solar panels that could be easily deposited onto most surfaces, including flexible and textured ones. These materials would also be lightweight, cheap to produce, and as efficient as today’s leading photovoltaic materials, which are mainly silicon. They’re the subject of increasing research and investment, but companies looking to harness their potential do have to address some remaining hurdles before perovskite-based solar cells can be commercially competitive.

The term perovskite refers not to a specific material, like silicon or cadmium telluride, other leading contenders in the photovoltaic realm, but to a whole family of compounds. The perovskite family of solar materials is named for its structural similarity to a mineral called perovskite, which was discovered in 1839 and named after Russian mineralogist L.A. Perovski.

The original mineral perovskite, which is calcium titanium oxide (CaTiO 3 ), has a distinctive crystal configuration. It has a three-part structure, whose components have come to be labeled A, B and X, in which lattices of the different components are interlaced. The family of perovskites consists of the many possible combinations of elements or molecules that can occupy each of the three components and form a structure similar to that of the original perovskite itself. (Some researchers even bend the rules a little by naming other crystal structures with similar elements “perovskites,” although this is frowned upon by crystallographers.)

“You can mix and match atoms and molecules into the structure, with some limits. For instance, if you try to stuff a molecule that’s too big into the structure, you’ll distort it. Eventually you might cause the 3D crystal to separate into a 2D layered structure, or lose ordered structure entirely,” says Tonio Buonassisi, professor of mechanical engineering at MIT and director of the Photovoltaics Research Laboratory. “Perovskites are highly tunable, like a build-your-own-adventure type of crystal structure,” he says.

That structure of interlaced lattices consists of ions or charged molecules, two of them (A and B) positively charged and the other one (X) negatively charged. The A and B ions are typically of quite different sizes, with the A being larger.

Within the overall category of perovskites, there are a number of types, including metal oxide perovskites, which have found applications in catalysis and in energy storage and conversion, such as in fuel cells and metal-air batteries. But a main focus of research activity for more than a decade has been on lead halide perovskites, according to Buonassisi says.

Within that category, there is still a legion of possibilities, and labs around the world are racing through the tedious work of trying to find the variations that show the best performance in efficiency, cost, and durability — which has so far been the most challenging of the three.

Many teams have also focused on variations that eliminate the use of lead, to avoid its environmental impact. Buonassisi notes, however, that “consistently over time, the lead-based devices continue to improve in their performance, and none of the other compositions got close in terms of electronic performance.” Work continues on exploring alternatives, but for now none can compete with the lead halide versions.

One of the great advantages perovskites offer is their great tolerance of defects in the structure, he says. Unlike silicon, which requires extremely high purity to function well in electronic devices, perovskites can function well even with numerous imperfections and impurities.

Searching for promising new candidate compositions for perovskites is a bit like looking for a needle in a haystack, but recently researchers have come up with a machine-learning system that can greatly streamline this process. This new approach could lead to a much faster development of new alternatives, says Buonassisi, who was a co-author of that research.

While perovskites continue to show great promise, and several companies are already gearing up to begin some commercial production, durability remains the biggest obstacle they face. While silicon solar panels retain up to 90 percent of their power output after 25 years, perovskites degrade much faster. Great progress has been made — initial samples lasted only a few hours, then weeks or months, but newer formulations have usable lifetimes of up to a few years, suitable for some applications where longevity is not essential.

From a research perspective, Buonassisi says, one advantage of perovskites is that they are relatively easy to make in the lab — the chemical constituents assemble readily. But that’s also their downside: “The material goes together very easily at room temperature,” he says, “but it also comes apart very easily at room temperature. Easy come, easy go!”

To deal with that issue, most researchers are focused on using various kinds of protective materials to encapsulate the perovskite, protecting it from exposure to air and moisture. But others are studying the exact mechanisms that lead to that degradation, in hopes of finding formulations or treatments that are more inherently robust. A key finding is that a process called autocatalysis is largely to blame for the breakdown.

In autocatalysis, as soon as one part of the material starts to degrade, its reaction products act as catalysts to start degrading the neighboring parts of the structure, and a runaway reaction gets underway. A similar problem existed in the early research on some other electronic materials, such as organic light-emitting diodes (OLEDs), and was eventually solved by adding additional purification steps to the raw materials, so a similar solution may be found in the case of perovskites, Buonassisi suggests.

Buonassisi and his co-researchers recently completed a study showing that once perovskites reach a usable lifetime of at least a decade, thanks to their much lower initial cost that would be sufficient to make them economically viable as a substitute for silicon in large, utility-scale solar farms.

Overall, progress in the development of perovskites has been impressive and encouraging, he says. With just a few years of work, it has already achieved efficiencies comparable to levels that cadmium telluride (CdTe), “which has been around for much longer, is still struggling to achieve,” he says. “The ease with which these higher performances are reached in this new material are almost stupefying.” Comparing the amount of research time spent to achieve a 1 percent improvement in efficiency, he says, the progress on perovskites has been somewhere between 100 and 1000 times faster than that on CdTe. “That’s one of the reasons it’s so exciting,” he says. 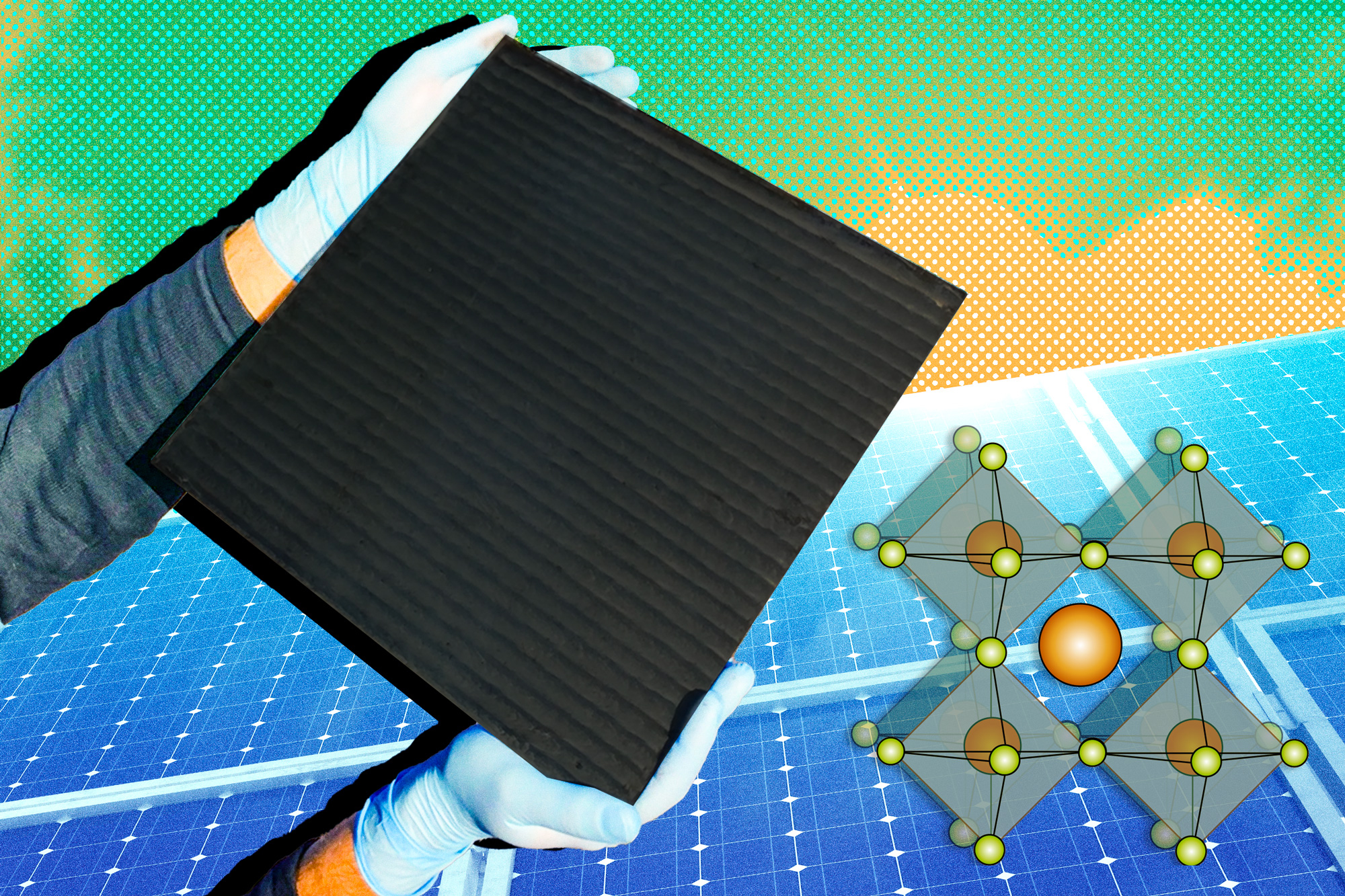