Researchers will work with industrial collaborators to pursue fusion as a source of carbon-free power.

Today, MIT announced plans to work with a newly formed company, Commonwealth Fusion Systems (CFS), to realize the promise of fusion as a source of unlimited, safe, carbon-free energy. Zach Hartwig, an assistant professor of nuclear science and engineering, is one of the Institute’s leads on the effort, along with others in MIT’s Plasma Fusion and Science Center (PSFC). He spoke with MIT News about the group’s vision for a fusion-powered future.

Q: Why is this new collaboration needed to support fusion energy?

A: Mitigating global climate change requires new sources of zero-carbon energy as soon as we can deliver them, and we are going to need a completely new approach to ensure that fusion energy can be a significant part of the solution.

The hard reality of climate change is that every single nation that has ever industrialized and made a better life for its citizens did so at the expense of the climate. There is, at present, simply no other way to do this than to dump carbon dioxide into the atmosphere by burning fossil fuels for energy.

As a global society, we have to do better. Fusion energy represents one tremendously attractive pathway, if we can demonstrate its potential and accelerate its commercial deployment. This is going to require new models of innovation that couple research institutions, such as MIT, with private companies, such as CFS, that are capable of commercializing fusion — and then providing that relationship with sustainable, patient capital that can fund the development of breakthrough energy solutions at scale.

Fusion is the fundamental energy source of the universe, powering our sun and the distant stars. The promise of harnessing fusion to produce energy on Earth is simple: limitless, safe, zero-carbon energy.

Like the governments of many nations, the U.S. has funded basic research on fusion science and technology since the 1950s, making tremendous progress toward the goal of fusion energy. MIT has long been a leading institution in fusion research, receiving research support primarily from the Department of Energy, including the funding of three major fusion energy experiments at MIT culminating in the Alcator C-Mod tokamak, which ended 25 years of operation in 2016. The DOE continues its support of fusion energy research at other facilities around the U.S. and the world, including the ITER experiment now under construction in France.

However, the mission and structure of federal research sponsorship does not extend to commercialization of the basic research it funds; this is the role of private companies, which are structured to raise capital and efficiently deploy competitive technologies into the commercial marketplace. But this raises a crucial question: How does promising, federally funded research transition into a robust commercial product — particularly in fusion energy, where the timelines and financial costs are higher than in many other technologies?

We believe that this new model of collaboration between MIT and CFS provides this bridge. MIT continues its involvement beyond the federally funded research stage, providing scientific expertise and infrastructure for research, while CFS provides stable funding from long-term investment and a mechanism to accelerate and commercialize the technology.

Importantly, this model is not limited to fusion energy, but creates a new framework for research universities and energy companies to partner on large-scale, long-term energy projects.

A critical, relatively recent technology breakthrough plays an important enabling role in this collaboration: a class of materials known as high-temperature superconductors that have only become commercially available with sufficient performance and quantity for fusion application within the last five years or so.

These materials will enable MIT and CFS to substantially increase the performance of superconducting fusion magnets, the principal initial focus of the research collaboration. These magnets will lead to dramatically smaller, lower-cost fusion devices that can produce net energy up to several hundred megawatts of power, and, most importantly, be strongly competitive in the energy marketplace in less than 20 years.

Q: What is Commonwealth Fusion Systems? Is it related to MIT?

A: Commonwealth Fusion Systems (CFS) is an independent, for-profit company created by former MIT staff and students to help accelerate the commercialization of fusion energy. CFS will sponsor research at MIT and work closely with us to determine and execute the research program leading to an experiment we call SPARC. We anticipate that this relationship will be an ongoing and long-term one.

CFS has raised significant funding to support efforts at MIT to achieve fusion energy and to conduct related business activities. The first part of these investments come from Eni, a multinational energy company seeking to diversify its portfolio with a forward-looking investment in fusion energy.

Some of this funding will come to PSFC and others at MIT, to support our research; some of it will go to support CFS’s own R&D and some may go to other institutions with relevant expertise. As with other sponsored research on campus, the results of MIT’s research will be publishable, and the Institute will own and license the intellectual property rights to discoveries made by its scientists along the way. The funding will also support MIT’s educational mission, providing research opportunities for graduate students.

Q: How does this effort differ from other ongoing approaches to fusion energy?

A: Fusion energy is widely recognized as having enormous potential. It is, therefore, pursued by a variety of players in a variety of ways.

One can broadly classify these efforts into two categories: government-funded research in magnetic confinement fusion, focusing primarily on the tokamak concept with the international ITER project as its focal point; and privately funded companies pursuing primarily non-tokamak-based devices. These two approaches are different from each other in their funding sources, organizational structures, mission objectives, and risk management philosophies.

The government-funded tokamak approach to fusion via ITER is a massive long-term effort supported by the governments of six nations — China, India, Japan, Russia, South Korea, and the United States — and the European Union. Being built in the south of France, ITER is a fusion science experiment designed to produce net fusion power sometime after 2035, if the present schedule holds.

ITER leverages proven physics built on 50 years of successful government-backed research, mitigating a critical risk in the underlying science. On the other hand, its sheer scale requires very high costs, international organizational challenges and, ultimately, long timelines that put fusion power on the grid sometime after 2060, quite possibly too late to substantially mitigate global warming associated with combustion of fossil fuels.

In contrast, the private fusion companies are smaller, nimbler, and learn by iterating quickly. This approach, coupled with private funding, provides driving pressure to move as quickly and efficiently as possible to commercialize fusion. Their universal challenge, however, is that their fusion concepts are based on unproven physics that, at best, may require a long time and extensive resources to prove the science and, at worst, may be unable to scale to the performance required for a fusion power plant.

The high-field pathway to fusion energy proposed by MIT and CFS seeks to take the best of both approaches — coupling the proven physics of the tokamak with the drive of a company focused on commercialization — and isolating the majority of the technical risk in the engineering development of the high-field magnets.

Overall, we believe two things about all of the ongoing efforts on fusion energy, both government- and privately funded. First, fusion energy is too important to solving major challenges facing humanity to focus exclusively on a single approach, particularly where parallel technology and funding pathways can exist side by side: There’s value in carefully incorporating a diversity of approaches to fusion energy in order to benefit from the different risk and reward trade-offs embodied in each. Second, all of the approaches are part of a nascent but growing fusion ecosystem that can work together in a surprising number of areas to achieve our mutual goal of fusion energy in time to make a difference. 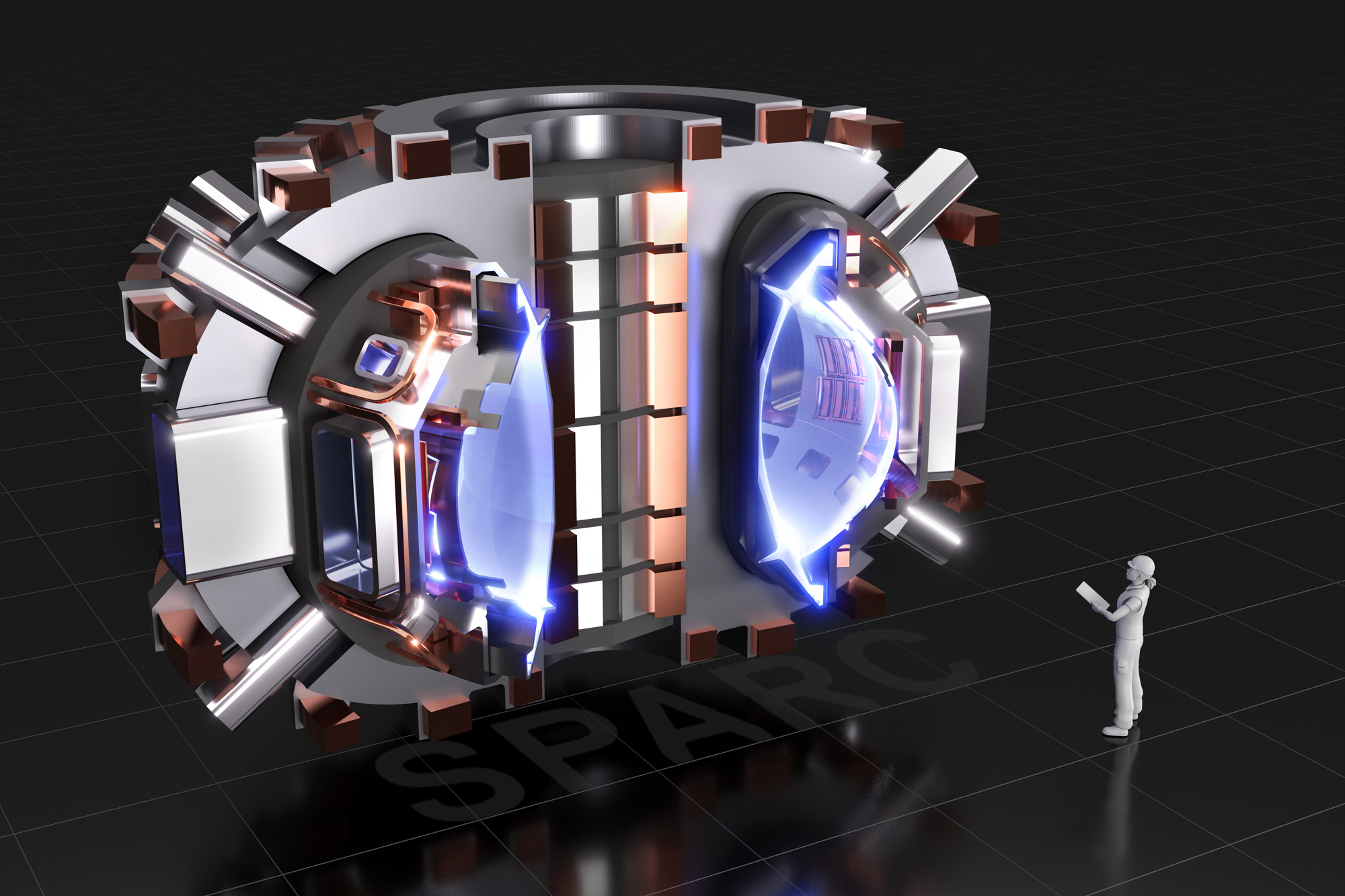 Validating the physics behind the new MIT-designed fusion experiment