Researchers have discovered the first evidence of a cloaked black hole in the early universe, existing just 850 million years after the Big Bang. 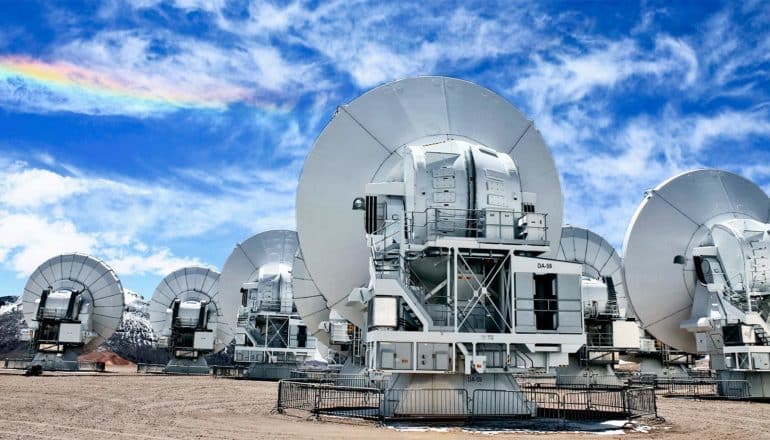 It’s the first evidence for a ‘cloaked black hole’ at an early time in the universe’s history.

Supermassive black holes typically grow by pulling in material from a disk of surrounding matter. For the most rapid growth, this process generates prodigious amounts of radiation in a very small region around the black hole, and produces an extremely bright, compact source called a quasar.

“It’s extraordinarily challenging to find quasars in this cloaked phase because so much of their radiation is absorbed and cannot be detected by current instruments,” says Fabio Vito, a fellow at the Pontificia Universidad Católica de Chile, who led the study, which he started as a postdoctoral researcher at Penn State.

“Thanks to Chandra and the ability of X-rays to pierce through the obscuring cloud, we think we’ve finally succeeded.”

The discovery resulted from observations of a quasar called PSO 167-13, which was first discovered by Pan-STARRS, an optical-light telescope in Hawaii. Optical observations from these and other surveys have resulted in the detection of about 200 quasars already shining brightly when the universe was less than a billion years old, or about 8 percent of its present age.

These surveys were only considered effective at finding unobscured black holes, because even thin clouds of surrounding gas and dust suppress the radiation they detect. Therefore researchers expected PSO 167-13 to be unobscured.

“It was like we were expecting a moth but saw a cocoon instead.”

“This was a complete surprise,” says coauthor Niel Brandt, a professor of astronomy and astrophysics and professor of physics at Penn State. “It was like we were expecting a moth but saw a cocoon instead. None of the other nine quasars we observed were cloaked, which is what we anticipated.”

An interesting twist for PSO 167-13, the researchers say, is that the galaxy hosting the quasar has a close companion galaxy visible in data previously obtained with the Atacama Large Millimeter Array (ALMA) of radio dishes in Chile and NASA’s Hubble Space Telescope. Because of their close separation and the faintness of the X-ray source, the team was unable to determine whether the newly discovered X-ray emission is associated with the quasar PSO 167-13 or with the companion galaxy.

If the X-rays come from the known quasar, then astronomers need to develop an explanation for why the quasar appeared highly obscured in X-rays but not in optical light. One possibility is that there has been a large and rapid increase in obscuration of the quasar during the 3 years between when researchers made the optical and the X-ray observations.

On the other hand, if instead the X-rays arise from the companion galaxy, then it represents the detection of a new quasar in close proximity to PSO 167-13. This quasar pair would be the most distant scientists have yet detected, breaking the record of 1.2 billion years after the Big Bang. In either of these two cases, the quasar Chandra detected would be the most distant cloaked one yet seen. The previous record holder is observed 1.3 billion years after the Big Bang. The authors plan to make a more refined characterization of the source with follow-up observations.

“With a longer Chandra observation, we’ll be able to get a better estimate of how obscured this black hole is,” says coauthor Franz Bauer, also from the Pontificia Universidad Católica de Chile and a former Penn State postdoctoral researcher, “and make a confident identification of the X-ray source with either the known quasar or the companion galaxy.”

“We suspect that the majority of supermassive black holes in the early universe are cloaked: It’s then crucial to detect and study them to understand how they could grow to masses of a billion suns so quickly,” says coauthor Roberto Gilli of INAF in Bologna, Italy.

A paper describing these results appears online in the journal Astronomy and Astrophysics. 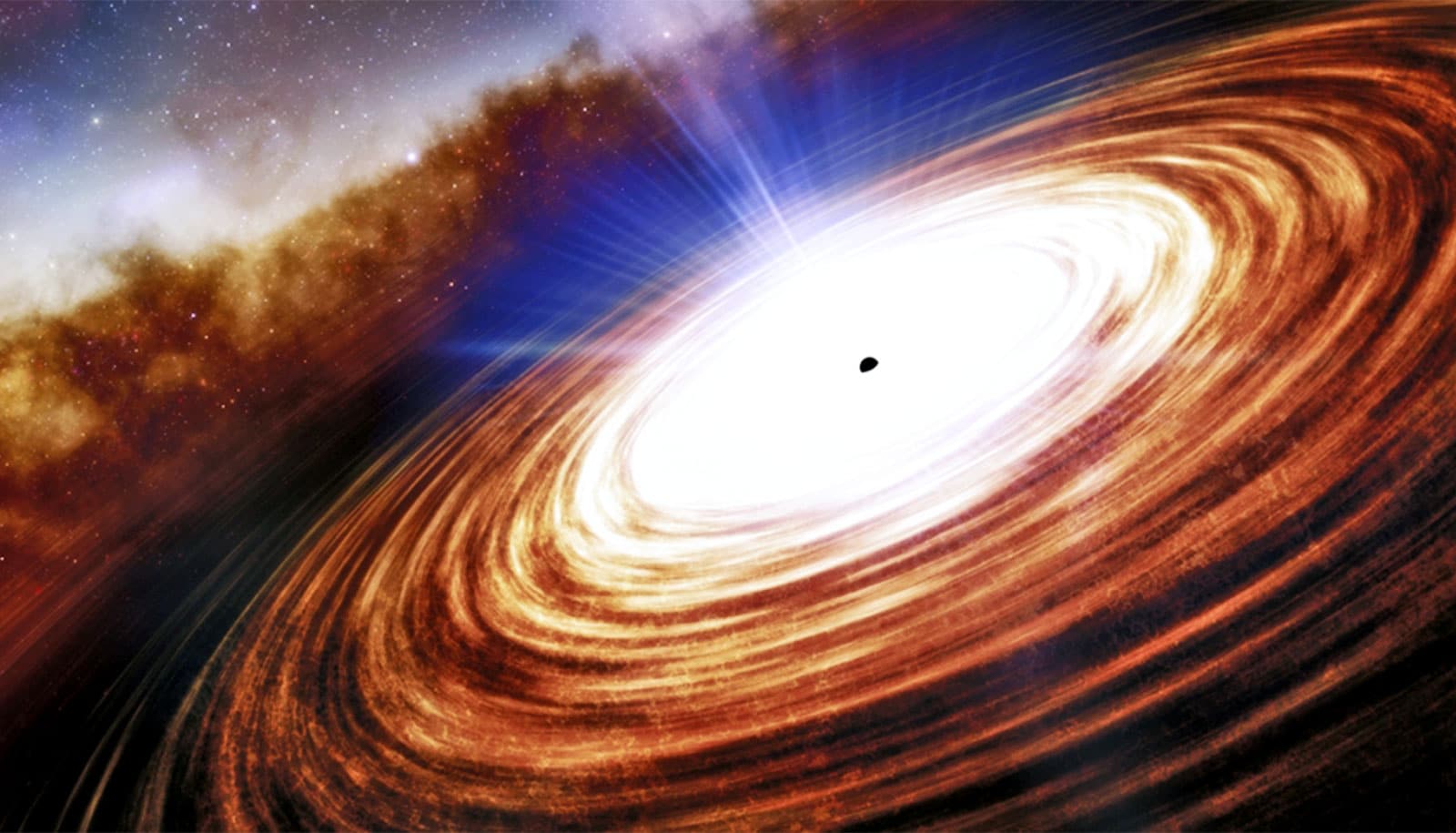 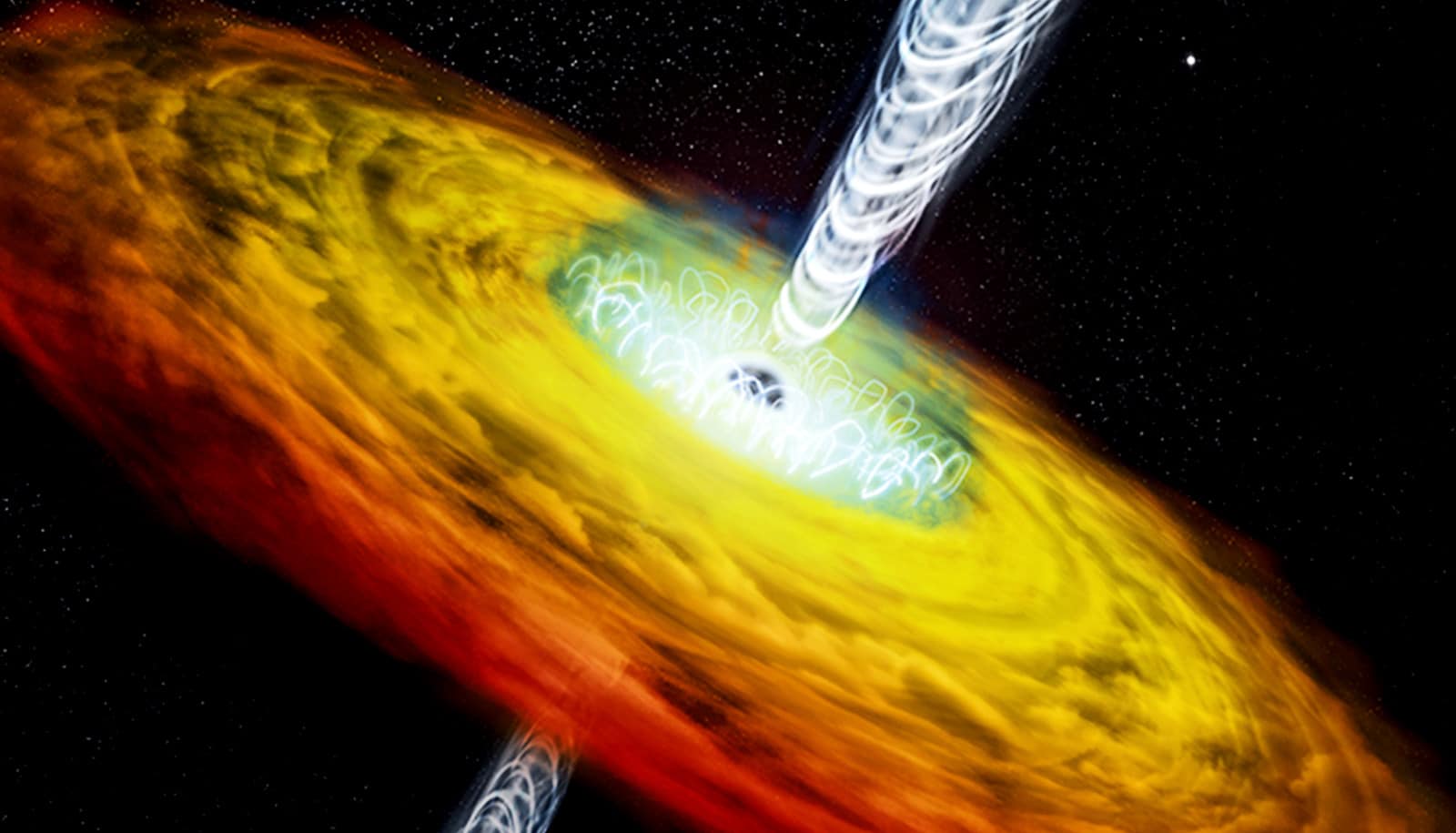