The way a mosquito uses its wings to make special sounds to attract a mate could lead to ways to build quieter drones, researchers say. 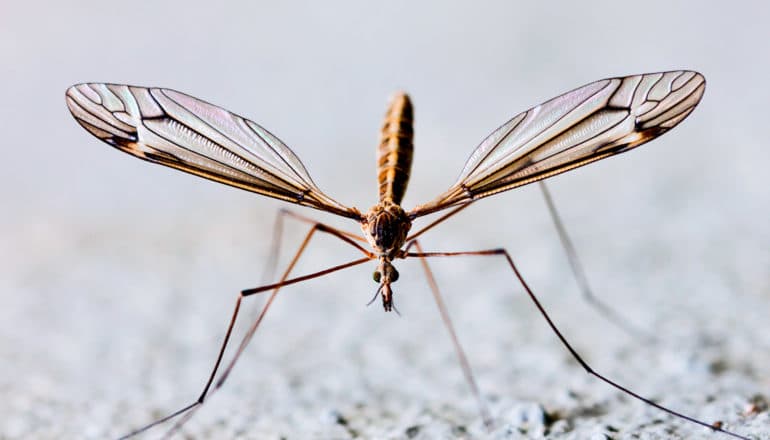 A mosquito flaps its wings not just to stay aloft but also to generate sound and point that buzz toward a potential mate, according to new research.

The new findings about the aerodynamics of mosquito wings could have implications for building quieter drones and for devising nontoxic methods to trap and exterminate the pests.

In a paper in Bioinspiration and Biomimetics, the researchers explain the aerodynamics and acoustics of the mosquito mating ritual through computer modeling.

“The same wings that are producing sound are also essential for them to fly,” says Rajat Mittal, a professor in the mechanical engineering department at Johns Hopkins University and an expert in computational fluid dynamics. “They somehow have to do both at the same time. And they’re effective at it. That’s why we have so much malaria and other mosquito-borne diseases.”

The research shows that “everything about mosquitoes seems perfectly adapted for accomplishing this sound-based communication.”

“Thus,” the paper states, “understanding the strategies and adaptations employed by insects such as mosquitoes to control their aeroacoustic noise could eventually provide insights into the development of quiet drones and other bioinspired micro-aerial vehicles.”

Mosquitoes have adapted their anatomy and flight physiology to solve the “complex multifactorial problem” of trying to fly and flirt at the same time.

In addition to devising quieter rotors for drones, the findings will likely inform research into how sound can interrupt the mating ritual, Mittal says. That could result in non-toxic methods to disrupt breeding and diminish mosquito populations.

“We continue to pursue that side of the research,” he says. “At the right frequency the mosquitoes have a hard time flying and can’t complete their mating ritual.”

With a high-frequency buzzing sound, the male mosquito attempts to connect with the low-frequency hum of a female. To do so, the team found the mosquito must flap its long, slender wings at high frequencies while also rotating them rapidly at the end of each stroke.

Yes, that annoying drill-like shrill that precedes a female’s bite is also a vibrating serenade to a male mosquito’s antennae. Unlike other flying insects their size, mosquitoes have adapted their anatomy and flight physiology to solve the “complex multifactorial problem” of trying to fly and flirt at the same time, Mittal says.

“The wing tones as well as the aerodynamic forces for flight are highly directional, and mosquitoes need to simultaneously control both for the successful completion of a mate-chase,” the paper says.

The quick rotation of the wings “generate additional lift force” to keep them aloft, according to the research. But this same rotation also aids in directing the “wing tone” in a forward direction, which is important for chasing potential mates.

“If I’m talking to you and I turn my back, you’ll have a hard time hearing me,” Mittal explains. “They have to be able to direct their sounds properly.”

The speedy flapping and truncated range, or amplitude, is far faster and shorter than similarly-sized winged insects such as fruit flies. That’s why mosquitoes, unlike fruit flies, possess a “wing tone buzz” that is “particularly annoying to humans,” according to the paper.

The “long and slender wing is perfect for making sounds,” Mittal says. “Fruit flies, which are similar in size to mosquitoes, have short and stubby wings. Furthermore, mosquitoes are flapping at much higher frequencies than fruit flies. There is a reason for this. Higher frequencies are better at producing sounds.”

Additional coauthors are from the University of North Carolina at Chapel Hill and Johns Hopkins. The work received funding from the Human Frontier Science Program.