"The blob" is responsible for an unprecedented seabird die-off from California to Alaska in 2015 and 2016, say researchers who studied the common murres. 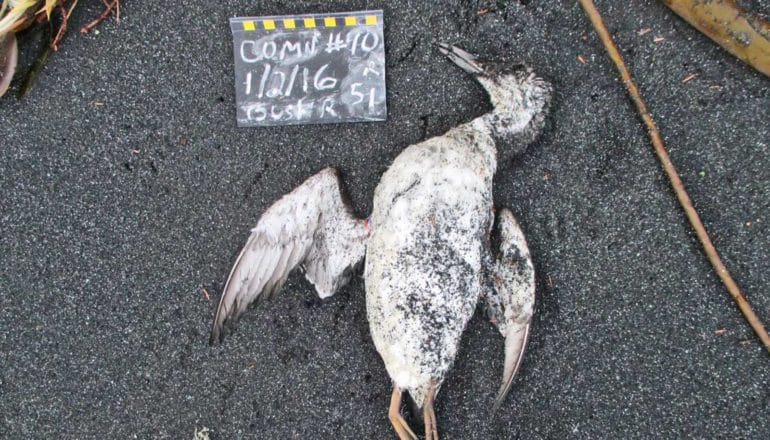 Why did nearly one million common murres wash ashore dead from California to Alaska in 2015 and 2016? “The blob,” caused this seabird die-off, say researchers.

Although the common murre must eat about half of its body weight in prey each day, common murres are experts at catching the small “forage fish” they need to survive. Herring, sardines, anchovies, and even juvenile salmon are no match for a hungry murre.

“The magnitude and scale of this failure has no precedent.”

So the die-off was unprecedented—both for murres, and across all bird species worldwide. Scientists blame an unexpected squeeze on the ecosystem’s food supply, brought on by a severe and long-lasting marine heat wave known as “the blob.”

Their findings appear in the journal PLOS ONE.

“Think of it as a run on the grocery stores at the same time that the delivery trucks to the stores stopped coming so often,” explains second author Julia Parrish, professor in the University of Washington School of Aquatic and Fishery Sciences. “We believe that the smoking gun for common murres—beyond the marine heat wave itself—was an ecosystem squeeze: fewer forage fish and smaller prey in general, at the same time that competition from big fish predators like walleye, pollock, and Pacific cod greatly increased.”

Common murres nest in colonies along cliffs and rocky ledges overlooking the ocean. The adult birds, about one foot in length, are mostly black with white bellies, and can dive more than two football fields below the ocean’s surface in search of prey.

Warmer surface water temperatures off the Pacific coast—a phenomenon known as “the blob”—first occurred in the fall and winter of 2013, and persisted through 2014 and 2015. Warming increased with the arrival of a powerful El Niño in 2015-2016. A number of other species experienced mass die-offs during this period, including tufted puffins, Cassin’s auklets, sea lions, and baleen whales. But the common murre die-off was by far the largest any way you measure it.

From May 2015 to April 2016, about 62,000 murre carcasses were found on beaches from central California north through Alaska. Citizen scientists in Alaska monitoring long-term sites counted numbers that reached 1,000 times more than normal for their beaches. Scientists estimate that the actual number of deaths was likely close to one million, since only a fraction of birds that die will wash to shore, and only a fraction of those will be in places that people can access.

Many of the birds that died were breeding-age adults. With massive shifts in food availability, murre breeding colonies across the entire region failed to produce chicks for the years during and after the marine heat wave event, the researchers find.

“The magnitude and scale of this failure has no precedent,” says lead author John Piatt, a research biologist at the US Geological Survey’s Alaska Science Center and an affiliate professor in the University of Washington School of Aquatic and Fishery Sciences. “It was astonishing and alarming, and a red-flag warning about the tremendous impact sustained ocean warming can have on the marine ecosystem.”

Trouble in the food chain

From a review of fisheries studies conducted during the heat wave period, the research team concluded that persistent warm ocean temperatures associated with “the blob” increased the metabolism of cold-blooded organisms from zooplankton and small forage fish up through larger predatory fish like salmon and pollock. With predatory fish eating more than usual, the demand for food at the top of the food chain was unsustainable. As a result, the once-plentiful schools of forage fish that murres rely on became harder to find.

“Food demands of large commercial groundfish like cod, pollock, halibut, and hake were predicted to increase dramatically with the level of warming observed with the blob, and since they eat many of the same prey as murres, this competition likely compounded the food supply problem for murres, leading to mass mortality events from starvation,” Piatt says.

As the largest mass die-off of seabirds in recorded history, the common murre event may help explain the other die-offs that occurred during the northeast Pacific marine heat wave, and also serve as a warning for what could happen during future marine heat waves, the researchers say.

University of Washington scientists recently identified another marine heatwave forming off the Washington coast and up into the Gulf of Alaska.

“All of this—as with the Cassin’s auklet mass mortality and the tufted puffin mass mortality—demonstrates that a warmer ocean world is a very different environment and a very different coastal ecosystem for many marine species,” says Parrish, who is also the executive director of the Coastal Observation and Seabird Survey Team, known as COASST. “Seabirds, as highly visible members of that system, are bellwethers of that change.”

Funding for the work came from the USGS Ecosystems Mission Area, the North Pacific Research Board, the National Science Foundation, and the Washington Department of Fish and Wildlife.

The post Seabird die-off ‘has no precedent’ appeared first on Futurity.